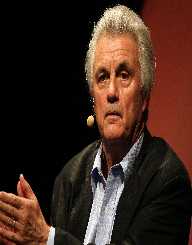 John Wallace Blunt Jr. was born 2nd March 1942 to John and Helen Blunt. He was born in Exeter, New Hampshire, in the United States. Irving took the surname of his stepfather, growing up with Colin Irving as his father. His biological father left before he was born.

Irving studied at Phillips Exeter Academy, where his stepfather served as a member of staff.

He was athletic as a student, competing on the wrestling team and working as an assistant coach.

Irving published his first novel, Setting Free the Bears, in 1968. Although the book sold, it didn't reach the successful heights Irving had hoped for.

He subsequently enrolled in a writers' workshop at the University of Iowa for further study.

Irving released his second novel, The Water-Method Man, in 1972. He third novel, The 158-Pound Marriage, was published in 1974. Once again, he had fair success.

In 1975, Irving joined the staff of Mount Holyoke College as an Assistant Professor of English.

When he finished his fourth novel, The World According to Garp, in 1978, he offered it to a different publisher. This was due to his original publisher, Random House. They had not provided the marketing and resources that Irving felt they should have.

He offered the work to Dutton who successfully turned the novel into a worldwide bestseller. The book adapted into a very successful movie, becoming a cult classic that received several nominations at the Academy Awards.

Irving catapulted to fame with his Garp book and became instantly known the world over. As a result of his new-found stardom, his subsequent novels became instant bestsellers. These included The Hotel New Hampshire (1981), The Cider House Rules (1985), and A Prayer for Owen Meany (1989).

The Hotel New Hampshire was adapted into a movie. Irving's next screenplay was for The Cider House Rules. It took Irving nearly a decade to finish and, consequently, it wasn't ready until 1999.

He subsequently went back to Random House for his future novels. Irving continued to write best-sellers and has written 20 books, the next due out in 2020. He has successfully adapted five of them to movies.

Warner Brothers and HBO invited Irving to create a miniseries on The World According to Garp in 2015. The project is still in early days.

Among his awards and honors, Irving has won an Academy Award. He was also a recipient of the Lambda Literary Award.

Irving married Shyla Leary in 1964. They subsequently had two children but divorced in 1982.

Irving's second marriage was to Janet Turnbull in 1987. Turnbull was one of his publishers. The couple has one son.

In 2007, Irving had treatment for prostate cancer.