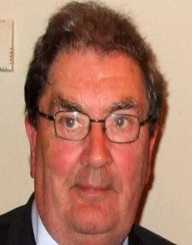 John Hume is an Irish politician and civil rights, activist. He was the leader and one of the founders of the Social and Democratic Labour Party. He was awarded the Nobel Peace Prize in 1998. He is considered to be one of the most important leaders in the modern political history of Ireland.

John Hume was born on January 18, 1937, in Derry, Northern Ireland. His family was Roman Catholic. At the time, the Catholic minority in Northern Ireland were poorly treated by the Protestant majority and by the police force. Growing up as the witness of this hostility, he was determined to make a change and to fight for social equality.

Hume was a student at the St. Columb's College and St. Patrick's College at the University of Maynooth, where he started his studies to become a priest. He later quit that programme and began studying French and history, obtaining a bachelor's degree in 1958 and a master's degree in 1964. He then returned to his hometown and got a job as a teacher in a local secondary school. He believed that proper education could help people improve their lives and by that set aside the social inequalities.

John Hume decided to improve the conditions in his town and joined the civil rights movement. He started advocating for many different causes. He participated in an unsuccessful attempt to open Ireland's second university in Derry. He was one of the founders of the Derry Credit Union, which issued loans at smaller rates than most banks, therefore helping people who couldn't otherwise afford them.

He helped form the Derry Housing Association, which built new homes in the area. He was also a prominent figure in Derry Citizen's Action Committee, a movement which was supposed to expose the wrongdoings of the Unionist Government.

Because the authorities opposed many of his requests, Hume organized a few nonviolent street protests. However, his campaigns were met with harsh and sometimes even violent opposition.

With his sights set on unifying Ireland, John Hume was committed to forming a party based on the European Social Democratic model. In 1970, he founded the Social and Democratic Labour Party, along with five other Parliament members and one Senator. He became the leader of the Party in 1979.

Because of his active leadership in the Derry community, Hume got elected as a member of the Parliament of Northern Ireland in 1969. This was just the beginning of the many times he would be chosen as a representative of the people. He was elected to the Northern Ireland Assembly in 1973. He served as the Minister of Commerce for just a few months in 1974. He was chosen to represent Northern Ireland in the European Parliament in 1979, and he then got re-elected in 1983, 1987, 1992, and 1997. In 1983, he took a seat in the British Parliament.

As an advocate for peace and partnership, John Hume served a crucial role as a negotiator for agreements and an adviser to different politicians. He also helped shut down laws that allowed for the violent behaviour of the army and their transgressions against the people of Northern Ireland.

Hume's most significant achievement began when he got involved in 'secret talks' with Gerry Adams, the leader of the Irish political party Sinn Fein, whose goal was to unify Ireland. These talks supposedly led to the Anglo-Irish Agreement in 1985, a treaty which aimed to solve the disputes in Northern Ireland.

The people were not satisfied with it, so Hume continued the dialogue with both the British government and Sinn Fein. This so-called 'Hume-Adams process' ultimately led to the ceasefire between Unionist paramilitary groups and the Irish Republican Army, and relative peace was established.

The process then continued with the meeting between John Hume and Unionist leader David Trimble, along with members of the government and the Sinn Fein Party. The talks ended with the Good Friday Agreement in 1998. This agreement stated that the government of Northern Ireland would consist of multiple power-sharing parties, and it ensured cooperation between the British and Irish governments. The peace in the country was finally restored.

Hume stepped down from the leadership of the Social Democratic and Labour Party in 2001. He announced his complete retirement from politics in 2004.

As one of the key figures behind the resolution of the situation in Northern Ireland, John Hume was awarded the Nobel Peace Prize in 1998 alongside Unionist leader David Trimble. He also received the Gandhi Peace Prize and the Martin Luther King Award, which makes him the only recipient of the three major peace prizes. He has also received numerous honorary doctorates, mostly from universities based in the United States. In 2012, Pope Benedict XVI gave Hume the title of Knight Commander of the Papal Order of St. Gregory the Great.

Hume is considered to be the driving force behind many of the political events in Northern Ireland. Because of his peaceful ideals and the great results he has achieved he is widely admired and respected by the people. In 2010, he was pronounced the Greatest Person in Ireland; a title won by a nationwide television poll. Upon his retirement, even his political opponents decided to pay their utmost respect to him.

Despite his official retirement from politics in 2004, John Hume remained consistent with his social activism. He continued to promote issues such as European integration, and he was involved in charitable campaigns which try to combat poverty. He has had a few public speeches, including visits to different universities. He also served as the president of the Derry Football Club, which he has supported his entire life. He stayed involved in the International Credit Union, an area he has been invested in since the early beginnings of his activism.

Unfortunately, due to an illness he had in the 1990s, he suffered brain damage, and he now has a form of dementia and memory loss. He lives with his wife Patricia, with whom he has three daughters and two sons.