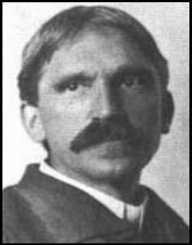 John Dewey was born on October 20, 1859, in Burlington, Vermont. He was one of four children in his modest family. His father was a merchant and had a successful grocery store. He left his business to join the Union Army as a soldier during the Civil War. After the war, his father led a successful tobacco shop, which allowed the family to live a financially stable and comfortable life.

When John Dewey graduated from University, his cousin offered him a seminary teaching job in Oil City, Pennsylvania. He worked at the seminary for two years but was laid off, since his cousin came back to take the position after his leave. After losing his job, Dewey went to Vermont and began teaching at a private school.

John was interested in philosophy already as a college student, and while working as a teacher, he began reading and discussing various philosophical topics with his former teacher H.A.P. Torrey. Since his passion for philosophy grew, Dewey decided to take a break from teaching and enrolled at the Johns Hopkins University. He studied psychology and philosophy.

In 1884, John Dewey received his doctorate and was hired to work as an assistant professor at the University of Michigan. There he met his future wife, Harriet Alice Chipman, and the two married in 1886. She gave birth to six of their children, and they adopted one child.

The writings of William James inspired John Dewey's philosophical views. Dewey is known as experimentalist, or instrumentalist, mainly focusing on human experience. He mainly rejected the rigid ideas of Transcendentalism of the academia.

During his academic career, Dewey was a proponent for educational reform, believing that education should be based on the principle of learning by doing. He and his wife Harriet began an experimental school in 1894, the University Elementary School at the University of Chicago. He wanted to test his educational theories but resigned when the university president fired his wife.

In 1919, John Dewey and his colleagues founded The New School for Social Research. The progressive, experimental school was emphasizing on the free exchange of intellectual ideas in the arts and social sciences. Dewey began lecturing on his educational reforms all around the world and was impressed by the experiments in Russian educational system. He shared his experiences in the United States, stating that educational system should focus on student’s interactions with the present.

After he retired from teaching in 1930, Dewey became an active member of several educational organizations, like New York Teachers Guild and the International League for Academic Freedom.

In 1887, John Dewey released his first book Psychology, and the following year, Leibniz’s New Essays Concerning the Human Understanding. During his life, Dewey has published more than 1000 works, including essays, articles, and books, covering a wide range of topics, including psychology, philosophy, education, culture, and religion.

Dewey believed in Democracy as the best type of government but thought that America’s democracy became strained during the Industrial Revolution. He found that industrialization created enormous wealth for only several people, and did not benefit the society.

John Dewey's wife died in 1927, just three years before his retirement. He remarried in 1946, at the age of 87 to Roberta Grant. After their marriage, he lived off his wife’s inheritance and his book royalties. Dewey died in 1952, after suffering from pneumonia. He was at the time 92 years old.