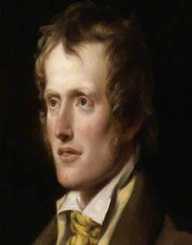 English Romantic poet John Clare was born in Helpston, Northamptonshire, England on the 13 July 1793. He had a twin sister Bessy, who died in infancy. His father, Parker Clare was a farm laborer, and the family lived in poverty some of the time.

Clare was sent to a school run by a Mrs. Bullimore in 1798 and 1800; he was enrolled at Glinton Church school where a Mr. Seaton taught him. James Merrishaw later replaced Seaton.

In 1804, an uncle gave John Clare a copy of Pomfret’s Poems. When his father read the poems to him, it began Clare’s lifelong obsession with poetry. He left school in 1805 and started working as a ploughboy Woodcroft Castle. He then worked as a potboy at the Blue Bell Inn in Hepston. Around this time he discovered the poetry of James Thomson. Thomson’s poetry inspired Clare to be a poet.

He subsequently wrote his first poem: The Morning Walk and continued to educate himself and write poetry. By 1807, he was working as a gardener at Burghley House and in 1812, joined the Northamptonshire Militia at Oundle. By 1816, he was back at Burghley House working as a gardener and then in 1817, and he worked in lime-burning. In 1819 Clare was introduced to Edward Drury, a Stambord bookseller and through him met Drury’s, John Taylor, the publisher of the English poet John Keats. A local editor Octavius Gilchrist also showed an interest in Clare’s poetry and 1819, Earl Spencer granted Clare a ten pound a year annuity.

Taylor and Hessey published John Clare's first book of poetry, Poems Descriptive of Rural Life and Scenery in 1820. The Marquis of Exeter, the owner of Burghley House, subsequently granted Clare 15 guineas per annum for life. He then visited London and was introduced to eminent people of the day including Lord Radstock and Mrs. Emmerson who became his patrons. The second volume of poetry, The Village Minstrel, was published in1821.

Returning home, he continued visiting London where during the 1820s he met Thomas Hood, Charles Lamb, William Hazlitt, Samuel Taylor Coleridge, and Thomas de Quincy. He also started work on his Journal and Autobiography. He published The Shepherd’s Calendar with Village Stories and Other Poems (1827). He completed The Midsummer Cushion in 1832. His final book of poetry was The Rural Muse (1835).

In 1837, John Clare's mental health broke down, and he was admitted to High Beach Asylum because he had become delusional. He was released but later committed to Northampton General Lunatic Asylum where he spent the last twenty-three years of his life. During his time in the asylum, he continued writing poetry and a member of staff, W.F. Knight assisted with transcribing Clare’s poems.

John Clare's first love was Mary Joyce, the daughter of a prosperous farmer. Joyce’s family did not approve of Clare, and the relationship did not develop. Later in life, he used to hallucinate about being married to Mary, even though she had by then died in a house fire.  He married Patty Turner, and the couple had seven children.
John Clare died on the 20 May 1864 in Northampton. He is buried in his home place of Helpston.

In 1893, an exhibition was held in Peterborough commemorating the centenary of Clare’s birth. A plaque was placed on his cottage in 1921 and Peterborough also held an exhibition which marked the centenary of his death in 1964. The John Clare Society was founded in 1981 and 1989. He was honored with a plaque in Poet’s Corner at Westminster Abbey in London. He is known today as The Peasants Poet. A recent biography is John Clare by Jonathan Bates.