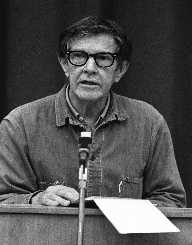 John Cage was many things – a musician, composer, writer, philosopher and an artist. His groundbreaking experiments with musical instruments, electroacoustic music and love for the indeterminate, had a great influence on the music of the 20th century.

John rejected the idea of rules in music, its pre-determined structures, and other classical theories. Instead, he made music by experimenting and listening, often using non-traditional instruments and these experiments made him a controversial musician, but also a pioneer in his field.

John Cage was born to American parents John Milton Cage, an inventor, and Lucretia Harvey, a journalist on September 5, 1912. His birthplace in Los Angeles. At an early age, Cage got his first music lessons from his aunt Phoebe and relatives. He was not very fond of the piano technique and focused more on sight-reading.

John Cage graduated from Los Angeles High School, valedictorian of his class in 1928. By then, he was determined to be a writer.

He attended the Pomona College in Claremont, but dropped out in 1930, when he saw his college degree of no use in his career. He then traveled to Europe, studying art, painting, and music.

It was during his travels that he studied the music of composers like Igor Stravinsky and Paul Hindemith. Eventually, he explored the music of Johann Sebastian Bach and was deeply influenced by it.

Cage learned music under Henry Cowell and Adolph Weiss. After being sufficiently confident in his abilities, he approached Arnold Schoenberg under whom he studied for two years at the University of South California and then at UCLA.

Cage’s musical career was full of experimentation. While his earlier works were not much appreciated, he received critical acclaim in his later career.

John Cage introduced many unorthodox instruments in music, some like the cactus plant, which also brought a chance factor into the composition as every plant is different.

The period before 1945 was full of hardships for this innovating musician.

John Cage juggled jobs and struggled to find a stable platform, till 1938, when he met Lou Harrison. Both shared an interest in percussive instruments, and the seeds of a long-term association were sown.

Cage later joined the Cornish College as a lecturer and came into contact with several artists some of whom became his lifelong friends. This included the Indian musician Gita Sarabhai.

In 1940, he invented the prepared piano and received a lot of fame for it. However, his music failed to impress, and he was homeless and without any money.

During this time he also studied Indian Philosophy and Zen Buddhism. Both influenced his music.

Success eluded John Cage for a large part of his career. In the 1960s he signed a contract with the C.F. Corporation, who would publish his works. It was then that his career took an upward path.

In the later part of his career, he composed music but left the choice of musical instruments to the performers. He also wrote several books of poetry and prose.

John Cage’s most famous work is 4’33’’. Musicians are expected to sit silently for 4 minutes and thirty-three seconds. Cage believed that by being silent, one could hear all the sounds from the surroundings. And it is through these sounds, that music is composed, not by playing, but by listening.

John Cage was a promoter of avant-garde music. His contributions have been highly controversial, with musicians and composers offering both harsh criticism and overwhelming praise.

It is, however, undeniable, that Cage’s experiments with rhythm & sound and his introduction of chance into music has influenced countless musicians of the 20th century and later.

In 1949, John Cage received the prestigious Guggenheim Fellowship. It enabled him to generate enough money for his trip to Europe. He was also awarded an Honorary Doctorate of Performing Arts, from the California Institute of the Arts.

At 70 years of age, John Cage had begun suffering from arthritis and other ailments. His health kept deteriorating with arthritis getting worse.

On August 11, 1992, he suffered a heart attack and died one day later. His ashes were scattered in the Ramapo Mountains.

John Cage had a relationship with Pauline Schindler, a composer, and arts promoter. She was 20 years older than him.

In 1934, he met Xenia Kashevaroff, an artist. They fell in love and married on June 7, 1935. Xenia also did bookbinding, sculpture, and collage.

Cage, however, was not entirely faithful in his marriage and the strain of economic struggles was too much for them to handle. After ten years of marriage, the couple divorced in 1945.

John Cage spent the rest of his life with dancer Merce Cunningham, the woman responsible for the rift in his first marriage.