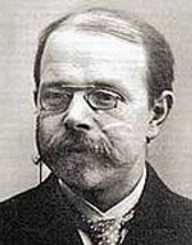 He did his high schooling at Bayreuth Gymnasium, followed by a school in Regensburg. After graduation, he enrolled at the University of Munich in 1894. His studies included physics, chemistry, and mathematics. He graduated in 1897.

Interestingly, in 1907, Johannes Stark asked Albert Einstein to write an article on his “principle of relativity” for the scientific journal that Stark was editing at the time. Although Einstein was almost unknown at that stage, Johannes Stark liked his work in general, on the theory.

In 1913, Johannes Stark made the discovery that would later win him the Nobel Prize. The “Stark Effect” is the shifting and splitting of spectral lines of atoms and molecules due to external electric fields being present.

Johannes Stark taught at RWTH Aachen University for eight years, and then joined the University of Greifswald in 1917 as a professor.

In 1920, he took up an appointment as a professor in the physics institute at the University of Wurzberg. He was there for two years.

Johannes Stark used his prize money from the Nobel award to set up his own private laboratory which he used to continue his research.

In 1933, Johannes Stark was elected President of the Physico-Technical Institute. He held the position for six years before retiring. He also served as President of the German Research Association during this same period.

Once the Nazi party started in Germany, Johannes Stark threw his support behind them and personally went on the attack against Albert Einstein and Werner Heisenberg. He started a scientific movement called “German Physics” and had many fellow scientists join by threatening them. After the Second World War, Johannes Stark was sentenced to a four-year prison term, but the sentence was suspended.

He released a book in 1934 called National Socialism and Science. With his nationalistic viewpoint, Johannes Stark put forward that scientists should have serving the nation as their priority, with emphasis on areas of research that would help the Germans with their arms for fighting. He maintained “theoretical physics” were not important, and decidedly “Jewish.” He also maintained that only pure-blooded Germans should hold scientific positions in Nazi Germany.

Johannes Stark married Luise Uepler, and they had five children together.