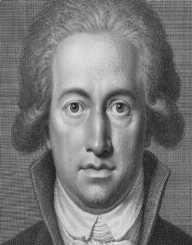 Johann Wolfgang von Goethe was a famous German writer and statesman. Born on August 28, 1749, his works entails, prose and verse drama, poetry, epic, a treatise on botany, anatomy and botany and color, literary and aesthetic criticism and memoirs among several others. Johann Wolfgang von Goethe has about 10,000 of his letters, 3,000 drawings and some fragments of his literary and scientific works still existing. Johann Wolfgang von Goethe gained popularity at age 25 with his literary works like The Sorrow of Young Werther and became a member of the Sturm und Drang literary movement. Some of his famous works include the scientific work Metamorphosis of Plants, 1788, the novel, Wilhelm Meister’s Apprenticeship the epic Hermann and Dorothea and the drama Faust.

In 1782, the Duke ennobled him, and that is shown with the “von” in his name. Johann Wolfgang von Goethe was strongly involved in human trafficking and mercenary slave trade during his position as the Saxe-Weimar War Commission and forcedly sold political dissident, criminals and other vagabonds in the Prussian and British Army during the American Revolution. This drew several criticisms from the German intellectual contemporaries. Johann Wolfgang von Goethe spent two years in the Italy peninsula and Sicily, from 1786 to 1788 and that proved very fruitful in terms of his aesthetic and philosophical development. Goethe was instrumental in the battle of Valmy against the French Revolution in 1792, where he assisted Duke Karl August. He also took part in the Siege of Mainz and a military observer and assistant to Karl August.

Johann Wolfgang von Goethe was married to Christine Vulpius on October 19, 1806, at Jakobskirche in Weimar. They have five children, but only Julius August Walter von Goethe survived infancy. Christiane died in 1816. Goethe had a relationship with Ulrike von Levetzow but could not marry her because of an opposition from her mother. Goethe died of heart failure in 1832 in Weimar. He was interred in the Ducal Vault at Weimar Historical Cemetery.

Johann Wolfgang von Goethe had a great interest in natural sciences, did several works morphology and color theory. He had the largest private collection of minerals in Europe and at the time of his death, had 17,800 rock samples in his study of geology. Through the study of the skull of an elephant, Goethe discovered the human intermaxillary bone also called the Goethe’s bone. He also worked in other science fields including botany.