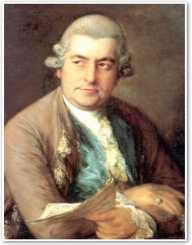 Johann Christian Bach is a former German classical music composer who became famous for his nickname the English Bach.

Johann Christian Bach or JC was born in Leipzig on September 5, 1735, to classical music composer Johann Sebastian Bach. He was the 18th child in the family and last boy in the list of 11 boys.

He apprenticed under his father until his death in 1750. He moved to Berlin to study under his 21 years older half-brother Karl Bach. He spent the next four years in Berlin before leaving for Italy. In Italy, Bach studied music under composer Giovanni Martini. He started playing the piano and classical organ in the Milan Cathedral. His interaction with the Milan Cathedral made him rethink his religious faith. Bach embraced Catholicism and abandoned his Lutheran background.

Bach started composing songs in the Italian language. He got commissions to compose for the Regio Theater in Turin to compose operas for it. He composed the Artaserse, a series of operas which premiered in 1760. Two years later. He received offers from Venice and London operas to compose songs for them. Bach chose London to Venice. In 1762, he traveled to London and settled in the English capital for a better part of his life. He spent 50 of his years based in London. Due to his influence in the Milan cathedral, the church choir did not replace his position. Instead, they spent years trying to lure him back.

He spent 20 years as the top classical composer at the King’s Theater in London. He blended the clarinet into the opera to produce the first song Orione in 1663. He became the royal entertainer to the English queen of German origin, Queen Charlotte. He trained the royal court including the queen and her children on classical music. He remained at the royal court for two decades before leaving. During this period, Bach became a musical success from the interaction with the high-end client.

Bach met Mozart in London. By the time, Mozart was a young boy of 8, traveling with his father Leopold in London. The talented young boy forged a lasting adoration for the work of Bach. In all the musical sonatas that Mozart did, a close similarity was adduced from the work of Bach. This theory came into reality when as a grown-up composer. Mozart regularly played the old Bach compositions. When Bach died, Mozart eulogized his death as a major loss to the musical world.

The pair of father and son in the musical world never materialized. Bach was born when the father was 50 years old. When the senior Bach died, Johann Bach was 15 years. Though they were both great composers, each had a contrasting style. Johann Sebastian invoked the traditional tunes of the dominant piano and symphony in his music. This was popular in German at the time.

On the other hand, Johann Christian blended in the clarinet and quick tempo Italian sonatas that endeared him to the Italian and English operas. He later reverted and played a rejuvenated style of the symphony. His music became sensitive to the masses and cognitive to the changing trends in the opera. He blended the traditional German symphony with the contemporary Rococo style.

In his late years, Bach had mixed fortunes. He continued to perform in London but his domain was dwindling. Younger composers like Mozart threatened his dominance with their new captivating symphonies and sonatas. He went into debt after his steward agent systematically embezzled his money. By the time of his death, Bach had grown into irreversible debt that threatened his estate.

Bach married soprano opera singer Cecilia Grassi in 1766. Grassi who was eleven years younger than Bach never bore him any children. She performed in most of his compositions during his stay in London.

Bach died on January 1, 1782, in the British capital of London. His grave lies in the St. Pancras Old Church graveyard in London. Upon his death, Queen Charlotte settled the debts left behind by Bach. In addition, she instituted monthly pension for the surviving widow.

At the age of 47, Bach died a young man in comparison to other composers. He influenced many young opera composers and entertained royalties during his active life. Unlike other mainstream composers, Bach never left any direct prodigy under his tutelage. He just left the music to dominate their hearts for them to emulate.

He made a name for himself in London despite being German. His music traveled across the geopolitical boundaries to permeate the German, Italian and British societies. His new style of blending different notes gave rise to contemporary music played by most opera composers today.