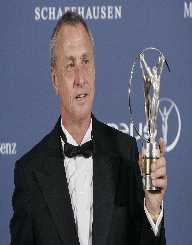 Cruijff once dominated the sports industry with adequate devotion and sacrifice. His love for playing and coaching made him lead more than one club. You can’t argue if he was the greatest player, he was naturally one of the top football players. The audience loved the way he substituted the nature of his favorite match. His love for football made him hop with his favorite ball in the Amsterdam Street till he was noticed by the town’s most remarkable club, Ajax. He continued to inspire his colleague and managed to conquer more than one country.

On 25 April 1947, Hendrik Johannes Cruijff was born to Bernarda Draaijer and Hermanus Cornelis in Amsterdam, Netherlands. The family lived satisfactorily as Johan’s father continued to show his favorite son some of the football moves. His father loved everything to do with football, so he encouraged his son to follow his footsteps. From his childhood days, number 14 (his nickname) loved to play with his neighborhood and school friends. At the age of ten, Johan teamed up with Ajax youth group. Unfortunately, his father died. In recognition of his father’s memory, he aimed more at his football career than school work. Johan went through several stages as he grew up into a great football player. Before the season ended, he was acknowledged as the senior for scoring continually. He had scored more than 20 goals, and the club finalized its final match at the league champions.

In 1965 Johan and his team emerged as the paramount game scorers and talk of the day. He correctly played a significant role that helped the club to garner the league label. Four years later Cruyff was given an opportunity to go and play for Ajax in the European Cup final (AC Milan).However, the club earned runners-up category. From 1966 to 1970 Johan was in a position to face the world cup final for his club. He was defined as the main contributory in the whole set. He went back home with the league cup title as well as the European Cup. For Ajax to win the final league, they had to score the European’s final cup against the Inter Milan club. For his nine good years and the last session in the club, Cruyff managed to win six league titles in 1973.He completed it all by scoring 250 goals in all competitions. For his remarkable stance, Cruyff was given a long-term contract in collaboration with the Spanish club, Barcelona.

Johan’s services were out of this world, I mean he became one of the most respected players at Barcelona. He spent five years seasons in the club, and he ended up scoring 48 goals in his 143 games. Not to mention, he cemented his title by scoring 5 to nill goals against Real Madrid. In 1980 Cruyff went back to Ajax which by then he went to compete with Feyenoord club. Little did he know that he will end up as the real player on the team. After leaving Feyenoord, Johan started his new calling. In 1985 he landed his managerial job at the Ajax club. Of course, he ended up winning his final seasons. In 1988 Ajax went to manage the Barcelona team. He managed to win his very first league in 1991 and later on won the European Cup. He coached distinguished players including Michael Laudrup, Romario, Pep Guardiola and Hristo Stoichkov. In 1999 Johan left Barcelona and till today he holds the title of the second most managers to win 11 trophies.

I guess Johan Cruyff loved his childhood team (Ajax), unlike others. In 2011 he went back and became an Ajax, Club advisor. Unluckily, this time around he argued with organization’s manager, and he opted to resign. He didn’t want Louis Van Gaal to be nominated as the principal manager of his long-term club. He went on to challenge the deal in court. In all, he ended up in the Mexican club where he efficiently worked as an advisor for one year.

On December 1968 Johan and his longtime partner, Danny Coster got married. The partners have two daughters, Susila and Chantal. His hard work later paid off. In 1973 Johan received the Ballon D award. In 1974 he was named as the paramount player in the FIFA World Cup. Unfortunately, Johan Cruijff died on 24 March 2016 at 68 years of age. He died after being troubled with lung cancer. He will always be remembered for his devotion and influence he had on the sports field.