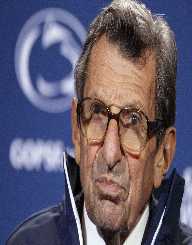 As a young adult, Joe Paterno went on to attend Brown University. While attending this school, Paterno was also a member of the football team. On the team, he played as a quarterback. In this last football season of his college career, Paterno helped his team win almost every game, only losing one the entire season. He later graduated from this school in 1950.

Paterno’s college football coach, Rip Engle, left Brown University after Joe Paterno graduated to coach instead at Penn State. He remembered Paterno fondly and requested that he work as his assistant coach. It was a job offer that Paterno couldn’t refuse! He gladly accepted the job. For the next sixteen years, Paterno worked at Penn State as Engle’s assistant.

In 1966, Engle retired, and Paterno was promoted to the position of coach for Penn State’s football team. During his first year as coach, Joe Paterno struggles to get his bearings, but by the end of the season, his team had managed to win half of the games. Joe Paterno did much better at coaching the next year, only losing two of the games. His team also made it to the Gator Bowl. For the last two years of the decade, his team won every single game and went to the Orange Bowl in both seasons, winning both times.

The 1990’s were one of Paterno’s best decades yet. The team had its high point in 1994 when it won every game of the season and won the Rose Bowl. Its low point was in 1992 when the team only won five games and lost the Blockbuster Bowl. Throughout the rest of the decade, the team averaged winning about 70-80% of their games. The team also managed to get into a Bowl every year. Their winning Bowls included the Fiesta Bowl (1991 and 1996), the Citrus Bowl (1993), the Hall of Fame Bowl (1995), the Outback Bowl (1998), and the Alamo Bowl (1999), as well as the ones previously mentioned.

The 2000’s brought in a rough patch for Joe Paterno and his team. In 2000, 2001, 2003, and 2004, the team lost more than half of their games. In the first half of this decade, the team only entered the Capital One Bowl and the Orange Bowl, and they lost the Orange Bowl. The second half of the decade fared much better for Joe Paterno and his team. However, they had no seasons in which they won every game. They were entered into several bowls, winning the Outback Bowl (2006), the Alamo Bowl (2007), and the Capital One Bowl (2009). After the 2011 season, Joe Paterno retired from this coaching career.

All of Joe Paterno’s awards are due to his coaching career. Some of his most impressive awards are listed below.

Joe Paterno married Sue Pohland in 1962. This couple had five children: Diana, David, Jay, Mary, and Scott; all of the Paterno children also attended and graduated from Penn State. Together, this couple also has over a dozen grandchildren.

After retiring, Joe Paterno discovered that he had lung cancer. The diagnosis was officially made in 2011. At first, the lung cancer seemed treatable, but it progressed terrifyingly fast. Joe Paterno died on January 22, 2012, in Pennsylvania, USA, due to his lung cancer. He was 85 years old when he passed away.