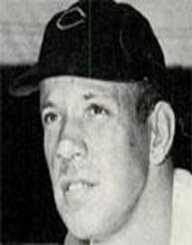 Because of the shortages of baseball players due to World War II (1939-1945) scouts were interested in Joe Nuxoll's father, Orville who was playing in a Sunday baseball league in Hamilton, Ohio. When advised that Nuxhall Snr. was not interested in a professional role due to having children to support, the scouts became interested in his 14-year-old son’s talent.

At age 15, Joe Nuxhall became the youngest player in modern major league history when he pitched in a game in 1944 for the Cincinnati Reds. It was on the 10 June 1944, and the Cincinnati Reds were playing the St Louis Cardinals at Crosley Field in Cincinnati. Nuxhall gave up five runs before being relieved. It was eight years before he turned to the major leagues.

In 1967, Joe Nuxhall became a broadcaster for the Reds, often working alongside Marty Brennaman on the radio. He retired from broadcasting in 2004, although he continued broadcasting on a limited basis until 2007. Throughout his career, Nuxhall played or broadcast from  59 major league stadiums.

There is a bronze statue of showing Nuxhall in his pitching position at the entrance to the Reds Great American Ball Park. In 2017, a mural featuring Joe Nuxhall painted on the side of Clark’s Sporting Goods in Hamilton, Ohio was unveiled. At 15, Nuxhall was the youngest person to play in a major league game.

Joe Nuxhall was married to Donzetta, and they had two sons: Phil and Kim. Joe Nuxhall died of cancer in 2007.