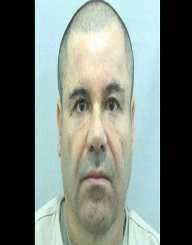 Joaquín “El Chapo” Guzmán Loera was born on December 25th, in 1954. He is famous for being the Mexican drug lord that commanded the Sinaloa Cartel. He was nicknamed ‘El Chapo’ which means Shorty in Spanish. He was only 168cm tall and thus, he earned the nickname.

Joaquín “El Chapo” Guzmán Loera was born on December 25th, in 1954. His birthplace was in Badiraguato, Mexico. His father was called Emilio Guzmán Bustillos whereas his mother was named María Consuelo Loera Pérez. Growing up, Guzmán’s family was poor. By the time he was a teenager, his father had kicked him out of their home to earn a living on his own. With time, he found a way of making money out of the marijuana business.

During the 1970s, Joaquín Guzmán Loera went ahead and partnered with a drug lord called Héctor Luis Palma Salazar. His primary role was to ensure that drugs were effectively transported through the Sierra Madre area into the United States border. With his ambition, Guzmán pushed to ensure that more and more drugs were transported into the United States. When it came to doing business, he had a rough approach as he could kill smugglers for delayed or erroneous shipments.

In the 1980s, he was introduced to the Guadalajara Cartel’s leaders such as Félix Gallardo. With time, he landed himself a job as his driver before later being bestowed with higher command. He began taking control of drug shipments that moved from Columbia into Mexico. After a period of successful deliveries, he earned complete trust of Gallardo and thus worked with him directly.

In 1989, Félix Gallardo was taken to prison. As a result, Joaquín Guzmán Loera went ahead and came up with his cartel called the Sinaloa Cartel. It did not take time before Guzmán became a wanted man both by the FBI and the DEA. During the early 1990s, he was regarded as one of the most dangerous drug lords.

Guzmán’s new cartel thrived merely because of their creative smuggling methods. One such famous ways involved hiding cocaine inside fire extinguishers; this technique was dubbed ‘chili peppers.’ With time, the cartel also branched out, and they smuggled other drugs such as heroin and methamphetamine into the United States and different continents.

Joaquín Guzmán Loera was first arrested in 1993. He was captured by Guatemalan authorities and after that deported to Mexico. He received his sentence of 20 years during his first arrest. While in prison, Guzmán continued running his drug activities as he bribed the authorities. In 2001, he managed to escape jail after bribing prison guards. As a result, his fame grew throughout Mexico.

Joaquín Guzmán Loera was arrested for the second time in February 2014. There were a number of requests from American officials that Guzmán should be deported to the United States. However, the Mexican President Enrique Peña Nieto rejected amid claims that Guzmán would never escape again.

In spite of the promises that the Mexican president had made, Joaquín Guzmán Loera managed to escape prison in July 2015. However, he was recaptured in January 2016 and extradited to the United States.