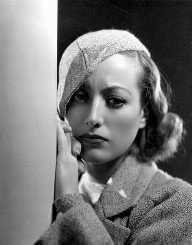 Lucile Fay LeSueurbest known in the professional circle as Joan Crawford was a talented and accomplished American film and television actress. Born on March 23, 1904, Joan Crawford made an entertainment debut as a dancer in traveling theatrical companies and stage showgirl. In 1925, she signed a motion picture contract with Metro-Goldwyn-Mayer and during that period became at pale, and later outshined her MGM colleagues Greta Garbo and Norma Shearer in the 1930s. Most of her film roles was that of a hard-working woman who later finds romance and success, a role, which resonated with women during the Depression era gaining her fame.

Her popularity made her one of the highest-paid women in the United States and a prominent Hollywood movie star. As a point, her movies began to lose money, and this gained her the label “box office poison,” but this negativity lasted briefly. She won the Academy Award for Best Actress with the film Mildred Palace in 1945. The American Film Institute ranked her tenth on the list of the greatest female stars of Classic Hollywood Cinema in 1999. Due to her marriage with Alfred Steele, the Chairman of Pepsi, Crawford began part of the company after her husband died in 1959 succeeding his in the board of directors, but she was forced to retire in 1973.

Joan Crawford, birth date has not being definite as it is placed either on March 23, 1904, 1905, or 1906 in San Antonio, Texas. Joan Crawford was the third and youngest child of Thomas E. LeSueur and Anna Bell Johnson. Thomas abandoned the family before Lucile’s birth only to reappear in 1930 in Abilene, Texas. After his departure, Anna married Henry J. Cassin, and the family lived in Lawton, Oklahoma. Cassin was an impresario and owned Ramsey Opera House. At age eleven, Cassin began sexually molestingLucile until she was admitted into a Catholic school. Growing up she loved to watch vaudeville acts perform on the stage of her stepfather's theatre. Nicknamed Billie at her childhood, she ambitioned to become a dancer. Lucile accidentally fell off the front porch of their home and landed his leg on a broken milk bottle sustaining a severe injury on her foot.

Joan Crawford was trying to dodge a piano lesson when the accident occurred. He leg was operated upon, and for the next 18 months, she could not attend either dancing lessons or elementary school. The family moved to Kansas City, Missouri after Cassin was accused of embezzlement and blacklisted in Lawton. While there Lucile enrolled at St. Agnes Academy in Kansas City. Her parents divorced, but Joan Crawford remained at St Agnes where she worked and studied. He spent more time working than studying during this period. Joan Crawford left St Agnes for Rockingham Academy, also as a working student. She datedRay Sterling, a trumpet player named while there. Lucile enrolled at Stephens College in Columbia, Missouri, where she gave her year of birth as 1906. Just after some few months there, she dropped out to pursue a dancing career.

Joan Crawford after dropping out of college, joined traveling revues as a dancer in choruses. At one of such instances in Detroit, producer Jacob J. Shubert discovered her. In 1924, Shubert placed her in the chorus line of the show, Innocent Eyes at the Winter Garden Theatre in New York on Broadway. Lucile later gained a $75 a week contract with MGM in 1925, and that was followed by her first film Lady of the Night. In that same year, he played in The Circle, Pretty Ladies, The Only Thing and The Merry Widow. It was during her time at MGM that the publicity head Pete Smith suggested to studio head Louis B. Mayer that Lucile is made to change her name. With this Smith organized the Name the Star contest in Movie Weekly, to allow readers choose a stage name for Lucile. The first suggested name was Joan Arden, but since an actress had already taken that name, the next available was Crawford which she initially did not like.

During this time, Joan Crawford was not satisfied with the size and quality of roles she was allotted, so decided to do a self-promotion campaign. MGM screenwriter, Frederica Sagor Maas puts it that, "No one decided to make Joan Crawford a star. Joan Crawford became a star because Joan Crawford decided to become a star." To achieve her aim, Joan Crawford, started to attend a dance in the afternoon and evening at hotels around Hollywood. This worked perfectly for her as MGM cast her in the Edmund Goulding’s Sally, Irene, and Mary in 1925.

During this period actress Norma Shearer, was the MGM’s most famous actress and decides what film she makes and what not to make. This was partly because of her marriage to MGM Head of Production, Irving Thalberg. She played roles in The Unknown 1927 and Across to Singapore in 1928. Crawford gained fame in Our Dancing Daughters in 1928, playing the role of Diana Medford.

Crawford’s first sound movie was in MGM’s The Hollywood Revue 1929 in 1929. MGM was the last studio to switch from silent to sound. The same year, Joan Crawford played her first starring role in all-talking feature-length film Untamed. The film was successful and was followed by Montana Moon in 1930. She appeared in several other films for MGM, including Dance, Fools, Dance, 1931, Grand Hotel, 1932 which won an Academy Award for Best Picture. She also appeared in I Live My Life, 1935, The Gorgeous Hussy, 1936 and Love on the Run in 1936.

Crawford signed a three movie deal with Warner Brothers for $500,000 and on July 1, 1943, was being placed on payroll. Hollywood Canteen, 1944, became her first film for the studio. Her next film was Mildred Pierce in 1945, which became a huge success with positive reviews. Crawford won an Academy Award for Best Actress in a Leading Role. She played roles in other films like Possessed, 1947, Daisy Kenyon, 1947, The Damned Don’t Cry, and The Woman Is Dangerous. She left Warner Brothers after the latter. After leaving she continued with her career playing diverse roles in films like Female on the Beach, 1955, The Story of Esther Costello, 1957, Strait-Jacket, 1964 and Night Gallery among others. She published her autobiography, A Portrait of Joan, in 1962 and the book My Way of Life, in 1971.

Crawford’s first marriage was allegedly with a saxophone player, James Welton in 1924 and the two lived together for months. However, Joan Crawford never acknowledged this marriage. She married Douglas Fairbank Jr on June 3, 1929. After their divorce, Joan Crawford married the stage actor Franchot Tone who she also divorced in 1939 for being abusive. The two came back together, and in 1964, Tone proposed to remarry Joan Crawford but that could not happen as he died in 1968. In 1947, Joan Crawford adopted two Cindy and Cathy. She had previously adopted Christiana and Christopher. Her last marriage was to Alfred Steele on May 10, 1955. Steele was the Chairman of the Board and Chief Executive Officer of Pepsi-Cola and later the President of the company before their marriage. He died in April 1959 of Heart attack, and with that, Crawford gained a position on the board of directors afterward.

However, she was forced to retire in 1973, on the request of the company executive, Don Kendall. Joan Crawford disinherited her two children Christiana and Christopher. In her will, she stated that "It is my intention to make no provision herein for my son, Christopher, or my daughter, Christina, for reasons which are well known to them." Crawford died on May 10, 1977, of a heart attack at her New York apartment. After her death, Christiana published a memoir, My Dearest One, criticising her mother of being abusive.