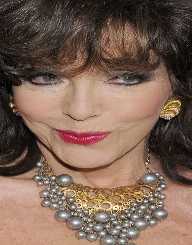 Joan Collins was born on May 23, 1933, in Paddington, London, England. Her parents were Joseph and Elsa Collins. The actress has two siblings, Jackie and Bill. Joan’s mother was a dance teacher, and her father was a theatrical booking agent, who helped her to get a start in acting.

Joan Collins attended the Francis Holland School for her primary education. When she graduated, she went to the Royal Academy of Dramatic Art (RADA) to study the subtler points of acting.

Joan Collins first signed with the J. Arthur Rank Film Company when she was 17 years old. She first appeared in a film with a small role as a beauty contest entrant in Lady Godiva Rides again in 1951. She was known for her beauty, and she went on to play similar roles in her early acting career. She mostly starred in B-rated movies that would not earn her much fame.

In the 1960s, Joan began working in television alongside movies. She was a guest actress on many television shows. It wasn’t until 1981 that Joan got her most famous role as Alexis Carrington in Dynasty. She worked on the show until the series ended in 1989. Her character was one of the reasons why the show became so famous. After the show ended, she returned to working on guest spots on other television shows and films. She also spent some time on the stage, but nothing she ever did was ever as famous as her role in Dynasty.

Because of her good looks and charm on camera, Joan Collins became a pinup model in the 1950s. She appeared on many magazine covers, including Span.

Once her acting career settled down, Joan Collins turned to pen and paper to make her fortune. She has worked on both fiction and nonfiction books - many of which were autobiographical. Her fiction books entertained readers with romance, mystery, and sometimes murder. Some of her most famous books are listed below.

Joan Collins has been donating to charity ever since she had enough money to spare. Her most favorite organizations involve children in need. Many charities she gives to help with education and safety for children as well. In 1983, Joan Collins was made a patron of the International Foundation for Children with Learning Disabilities because of her generous donations. She is an honorary founding member of the National Society for the Prevention of Cruelty to Children.

In 1983, Joan Collins won a Golden Globe for her work on Dynasty. Before that, she had been nominated for the award six times. Later, she also won an Emmy for the same role.

In 1997, Joan Collins was made an Officer of the Order of the British Empire by none of other than Queen Elizabeth II herself. She earned this award because of her many books, movies, and charitable donations. In 2014, she was named a Dame Queen Elizabeth II, also for her charitable contributions.

Joan Collins was first married to Maxwell Reed from 1953 to 1956. They could have no children together. After the divorce, she married Anthony Newley in 1963. They had two children together, Alexander and Tara Newley.  However, this relationship also ended in divorce in 1971.