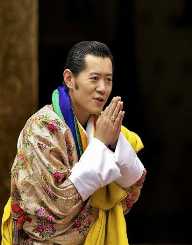 Jigme Wangchuck attended boarding school in Massachusetts where he was a pupil at the Phillips Academy. He then became a student at the Cushing Academy, graduating in 1999. After graduating, he enrolled at Wheaton College in Massachusetts. Wangchuck also obtained an M.A. degree in political science from Magdalen College at Oxford University. To finish off his education, he did a twelve-month leadership course at the Lal Bahadur Shastri National Academy of Administration.

His father abdicated on the 9 December 2006, and at the age of twenty-four, Jigme Wangchuck became the world’s youngest monarchs. His new title was the 5th Dragon King of the Kingdom of Bhutan.

King Jigme Khesar married Jetsun Perma on the 13 October 2011. At the ceremony, Perma was crowned Queen of Bhutan. Their son was born on the 5 February 2016.