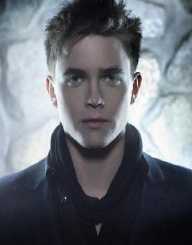 Jesse McCartney is an American actor and singer who is best known for his voice roles in the Alvin and the Chipmunks films.

McCartney was born in Westchester, New York on 9 April 1987. His parents are Scott and Ginger McCartney. McCartney showed love for acting and singing from an early age. At age seven McCartney began performing in a local community theatre. He joined a national tour performing in a production of The King and I at age ten. McCartney also sang with a pop group, Sugar Beats, between 1998 and 2000.

McCartney enjoyed his first major career success with the boy band Dream Street. McCartney performed with the group between 1999 and 2002. They released a self-titled album in 2001, and it achieved gold record status. The band ultimately was not a commercial success and split following a legal dispute between the band’s parents and the record label. McCartney began a solo career following the break-up of Dream Street.

McCartney was involved in the writing during the two-year production of his first solo album Beautiful Soul. It was released in 2004, and it achieved platinum status. McCartney toured extensively to promote the album and opened for the Backstreet Boys on their Australian tour. His second album, Right Where You Want Me, reached the top ten in the Italian and Taiwanese music charts but was less of a commercial success than his debut album. McCartney’s biggest success arguably came in 2007 when he co-wrote Bleeding Love with One Republic frontman Ryan Tedder. The song was released by British song contest X Factor winner Leona Lewis and reached number one across the world.

McCartney would record his version of the song, and it appeared on his third album, Departure. Departure peaked at number fourteen on the Billboard charts. In 2013, McCartney again toured with the Backstreet Boys. He released his fourth studio album, In Technicolor, in 2014. The album reached 35 on the Billboard charts. McCartney has worked extensively with Disney during his career. He has featured on the soundtracks to some Disney shows and compilations. He has also made appearances in the Disney shows, Hannah Montana and The Suite Life.

McCartney has been involved with the charity Little Kids Rock, which provides instruments to disadvantaged children. He launched his fragrance Wanted by Jesse in 2011.