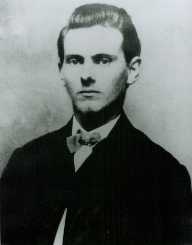 Jesse James was a famous as well as a legendary bank robber, train robber and gang leader that terrorized America in the 19th century. Born in Missouri in a prosperous family as well a society with a happy childhood until his father’s depart. His mother married twice until she had an unstable family life for both Jesse and his brother. At the age of 16, the two brothers joined the Quantrill Raiders Gang who specializes in robbing banks and trains. Their most an initial aim was to attack the members of the Union troops as well as kill many supporters of Abraham Lincoln.

Jesse James later rose into becoming a hardened criminal by changing gangs robbing banks. He became a national figure with his crime making many individuals including detective agencies being sent to capture him with a bounty on his head. He was eventually killed by one of his close members, Robert Ford who was later rewarded. He is usually considered as a legend compared to Robin Hood.

Jesse James was born on 5, September 1847 to Zerelda and Robert James in Clay County, Missouri. His father was a rich man as well as a hemp father and Baptist in Kentucky. They had big farmland with six slaves coupled with a prosperous life. James had two siblings who include Alexander Franklin and Susan James. His father left his family for in search of gold into the California gold fields. His mother remarried, and her husband maltreated him and his brother badly. It is probably because of this that the duo got into a life of crime.

William Quantrill formed a band of guerrilla fighters in 1862, and Jesse James and his brothers joined this. The gang did not only attack the Union Troops but also raided and assassinated the supporters of Abraham Lincoln. Later on, the gang attacked the town of Lawrence killing over 150 inhabitants and setting over 180 buildings on fire. This was considered to be one of the worst crime of the Civil War. Later on, Frank James was able to lead the gang to Texas with his brother. After Taylor was short in 1864, the two James left the gang to join another gang which was led by Bloody Bill Anderson. Jesse James was shot in the chest in the same here while Frank was taken hold by the Clay County Marshal to have killed more than 100 members of the AVE Johnson’s regiment. The brothers eventually separated with Jesse going to Texas with the gang led by Archie Clement while Frank went to Kentucky with Quantrill.

As time goes on, Jesse James became very ruthless as he robbed different banks including Clay County Savings Association in Liberty in daylight. The gang became very ruthless and legendary in robberies. It was believed that the James Brothers were involved when the jailer was killed in a bid to demand the release of the two members of Quantrill. James became well known after he robbed the Daviess County Saving Association in Gallatin, Missouri. The robbery was documented in the newspaper making him famous. By 1869, Jesse James has become very popular with the title of an outlaw. A bounty was placed on his head. Another thing that made him stand out is that he always communicate his motives to the public through Edwards, the Editor of Kansas City Time, Thus, he becomes a symbol of Confederate Defiance of Reconstruction.

Jesse James carried out a train robbery for the first time in 1873 stealing 3000 US dollars with Cole Younger and his brothers. He kept on carrying out more train robberies but never robbed the passengers creating an image of Robin Hood. The group never shared the money. Later, the Pinkerton National Detective Agency was asked to capture him and his gang, but they failed in 1874. Jesse James later went on to rob Frist National Bank of Northfield, Minnesota with his club but only James brothers were left alive and became on the run in 1876. The James formed another gang robbing trains. However, the new group was not strong or coherent as the other one. He eventually decided to live in Missouri after the breakdown of the group asking the Ford Brothers to move in with him. He, however, found his end with the bullet of Robert Ford who has signed a pact with the governor.

Jesse James married his cousin on 24, April 1874 with whom he had two children who were Mary Susan James and Jesse Edward James. They later had twins who died in infancy. Edward became a lawyer practicing in Missouri and California. Jesse James was shot dead in 1882 while preparing for a robbery with the Ford brothers. He was shot in the head.