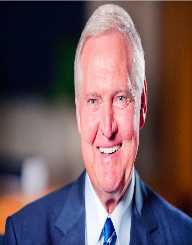 Jerry Alan West was born 28th May 1938, to Howard and Cecil West. He was born in Chelyan, West Virginia, in the United States. West was one of six children, born into quite a poor family. His father was an electrician for a coal mine, and his mother was a housewife.

West studied at East Bank High School, and he graduated in 1956. During his high school years, West played basketball. It wasn’t long before he led the team in his freshman-year, and he was soon recognized as one of the greatest high school basketballers in West Virginia.

In his freshman year, West played every game, and the team didn’t lose. The following year which was his junior year, West started breaking records and had a very good season. He finished with the title of Most Outstanding Player of the Year’s Final Four. He received several other awards that year as well.

West’s professional basketball career began in 1960. He was drafted by the Minneapolis Lakers, who shortly after selecting him, relocated to Los Angeles. West’s coach from university was hired at the same time. He decided to play West in a different position, and West wasn’t very comfortable with the new role.

Although his team mates gave him nicknames because of his country accent, he soon impressed them with his talent on the court. He was also recognized for his work ethic, and soon earned himself the reputation of being the second scoring option for the Lakers.

The Lakers reached the NBA playoffs in 1961, although they didn’t win.

In 1962, the main scorer, Baylor, was required to complete U.S. Army Reserves duty. West took the opportunity to step up, and he became the main scorer for the team. The Lakers made the playoffs that year, but they lost the finals.

Baylor returned for the 1962-63 season. West was named an NBA All-Star again, but he missed the last seven games with a hamstring injury. Once again, they made the playoffs, but once again, didn’t win.

West was the scoring leader in the 1963-64 season, but the season was a write-off for the Lakers. In the 1964-65 season, Baylor suffered a serious injury which threatened his career. West took over the position once again, but for the next several seasons, although they performed well, the Lakers couldn’t win the title.

In the 1972 NBA Finals, thanks to the efforts of West, the Lakers won their first NBA title.

West’s last season was the 1973-74 NBA season. He was 36 years old, and his career had come to an end due to a contractual dispute.

West was named as coach of the Lakers in the 1976-77 season. The Lakers made the playoffs for the next three seasons.

West then moved into the position of a scout for three years, and in 1982-83 became the General Manager. West was credited with the fantastic success that then ensued for the Lakers. They won five championship rings through the 1980s, and then another three from 2000 to 2002.

West then moved to the Memphis Grizzlies in 2002 to become the General Manager. Although he didn’t take the Grizzlies to the same success as the Lakers, the Grizzlies did improve substantially and became a team that regularly reached the playoffs.

In 2011, West moved to the Golden State Warriors as an executive board member. His salary package included a part ownership in the team. The Warriors won their first championship in 40 years in 2015.

In 2017, West left the Warriors and took up an executive board member position with the Los Angeles Clippers.

West achieved many awards and honors. As a player, he was named an NBA All-Star 14 times, and listed in the All-NBA First Team10 times.

As an executive, he won eight NBA Championships, and two NBA Executive of the Year awards.

West married Martha Jane Kane in 1960. The couple have three sons together, but they divorced in 1976.

West’s second marriage was to Karen in 1978. They have two sons together.