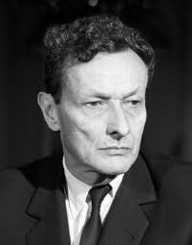 French actor, producer-director, and mime artist Jean-Louis Barrault was born on September 8, 1910, in Le Vésinet, Seine-et-Oise [now Yvelines], France. He is credited for his immense contribution for the revival of an innovative, experimental category of contemporary works as well as the traditional classic style of plays in French Theatre post World War II. The celebrated stage actor grew up studying at the Charles Dullin School of Dramatic Art. He also learnt pantomime while working under legendary French actor and pantomime artist Étienne Decroux.

In his initial days, he studied art before falling in love with theatre. He had to work hard to support his existence. He worked as a bookkeeper and even as a flower salesman before making a name in the show business. In 1931, he made his stage debut by playing the role of a servant in Volpone, a Charles Dullin production. His first independent production was a mime play. It was based on a novel titled ‘As I Lay Dying’ by William Faulkner. The play was staged in 1935.

During the early days of his career, Jean-Louis Barrault confined himself only to stage productions. Among his first productions, 'Miguel de Cervantes’s Numancia' (1937) and 'Faim' (1939), an adaptation of the novel 'Hunger' written by Knut Hamsun, are worth mentioning. He made his debut as a theatre director in 1935 in the play 'Les beaux jours.' After gaining considerable success in theaters, he turned his attention towards films, though theatre always remained as his first love.

He acted in numerous classical and romantic films and made his mark as an actor par excellence. His role in films like 'Mirages' (1938), 'Bizarre, Bizarre' (1937) and 'Les Enfants du Paradis' (1945) have made an enormous impact on the contemporary film history. Though he appeared in approximately 50 films during his lifetime, he never considered him as a film actor. His first love was theatre, and it remained his principal occupation.


LIFE AS AN ACTOR-DIRECTOR IN COMEDIE FRANCAISE

In 1940, Jean-Louis Barrault joined the Comedie Francaise and began his career there both as an actor and director. He remained with the group until 1946 and enhanced his reputation as a director working in such plays as Jean Racine's 'Phèdre,' Paul Claudel's ‘Le Soulier de satin’ and 'Antony and Cleopatra.'

FORMATION OF HIS OWN THEATRE COMPANY

Jean-Louis Barrault met actress Madeleine Renaud in 1936. They tied the nuptial knot four years later in 1940. Upon their marriage, the couple jointly founded many theatres including their very own company titled Compagnie M. Renaud–J.L. Barrault. The debut production of their company was Hamlet, which was translated by André Gide. 'False Confessions' and 'Nights of Anger' followed their first production. Their smart presentation propelled the success of their theatre company.

They cleverly presented a mixture of old French and other foreign language classics with some innovative, experimental genre of contemporary plays. Some of the other prominent plays of their company include the likes of Christopher Fry’s 'A Sleep of Prisoners' (1955), Eugène Ionesco’s 'Rhinocéros' (1960). Georges Feydeau’s farces and works by Henry de Montherlant, Jean-Paul Sartre and Jean Anouilh are also part of their plays.

The Barrault couple toured extensively with their newly founded theatres. They enthralled the European audience with plays such as 'Christopher Columbus' (1957), where Renaud played the role of Queen Isabella, 'The Marriage of Figaro' (1964) and 'The Misanthrope' (1957). In November 1952, the couple made a scintillating Broadway debut with plays like 'The Trial,' 'Les Fausses Confidences,' 'Amphitryon,' 'Baptiste,' 'Hamlet,' 'Keep Your Eyes on Amelie', and 'Scapin'.

After that, in 1957, they returned to Broadway with the repertory of plays like 'Intermezzo,' 'Volpone,' 'Christopher Columbus' and 'The Misanthrope.' A special Tony Award was declared to honor him for his marvelous work.

He is best remembered for his role as the pantomimist Deburau in the 1945 film 'Les Enfants du Paradis.' In 1988, he last worked in a movie called 'La lumière du lac.' French authorities awarded him as an officer of the Legion of Honour.