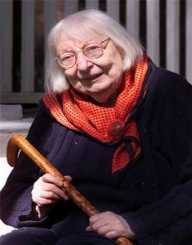 Jane Jacobs was born on May 4, 1916, in Scranton, Pennsylvania, USA. Her parents were John and Bess Butzner. She also has three siblings.

Jane Jacobs first attended Scranton High School. She was a bright girl, but she often was bored with the pace of her classes. Jane Jacobs preferred to read and write more than she liked to pay attention in class. Once she graduated from the high school, she enrolled in Columbia University in the School of General Studies. She stayed at the school for two years, and when she was done, she had graduated, instead of dropping out.

While in college and after graduating, Jane Jacobs held some different writing-based careers. Some of her first careers were working as a freelance writer ‘(writing for various groups without a long-term contract) and a stenographer (a person who transcribes speech into writing, like at a courthouse).

After college, she began working in more long-term jobs, writing in magazines. The first magazine she wrote for was Iron Age. It was here that she got her first taste of political activism. At the workplace, Jane Jacobs was discriminated against for being a woman. From here on out, her writing would become more political. Her writing was the most political when she began working for the United States Military as a feature writer during World War II.

Jane Jacobs also worked as a reporter and writer for the magazine, Amerika, during this time. She worked for Amerika until she resigned in 1953.

Jane’s next job after working for Amerika was writing for another magazine, Architectural Forum. While working for this magazine, she wrote about buildings, monuments, and urban planning. Even though she was not working in the government at this time, her writing was still political. Jane Jacobs wrote about civil write in between the lines while writing about urban planning.

In her writing, Jane Jacobs often criticized the fact that developers often did not think about people of color while working on urban planning. This common feature in her writing made her both loved and hated by various groups. Jane resigned from the magazine in 1962 to focus on writing her books and taking care of her children.

Jane Jacob’s first book was published in 1961 and was titled The Death and Life of Great American Cities. This book would set the tone for many of her books to come, as most of her books dealt with the idea of architecture and the way it affected people. Some of her most famous books are listed below.

Throughout her career, Jane Jacobs received many awards for her work with her books. Some of her most prestigious awards are listed below.

Vincent Scully PrizeThe American Sociological Association Outstanding Lifetime Contribution Award
Jane Jacobs was made an Officer of the Order of Canada in 1996 for her work in writing and social justice.

Jane Butzner officially became Jane Jacobs when she married Robert Jacobs in 1944. The couple had three children together: James, Ned, and Burgin.