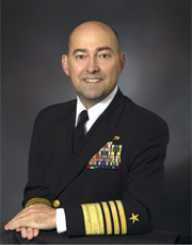 His father served in the U.S. Marine Corps and as a colonel saw service in World War II, the Korean War, and the Vietnam War. Stavridis’ grandfather escaped from Turkey to Athens during the 1920s when authorities were targeting Greeks. During the same period, his great-uncle was killed during the violence against the Greek minority in Turkey.

As a Surface Warfare officer, James Stavridis commanded the Destroyer USS Barry (1993-1995). During this period, the USS Barry was deployed to Bosnia and Haiti as well as a combat cruise to the Arabian Gulf. The USS Barry won the Battenberg Cup, named as the top ship in the Atlantic Fleet. Commanding the Destroyer Squadron 21 in 1998 to the Arabian Gulf, he won the Navy League’s John Paul Jones Award for Inspirational Leadership.

Stavridis was appointed the commander of the Enterprise Carrier Strike Group which conducted operations in the Arabian Gulf during Operation Iraqi Freedom and Operation Enduring Freedom (2002-2004). He then commanded the U.S. Southern Command in Miami, Florida covering the Caribbean and Latin America (2006-2009). Stavridis did shore duty as a long range and strategic planner as Chief of Naval Operations as well as the Chairman of the Joint Chiefs of Staff; Executive Association to the Secretary of the Navy and Senior Military Assistant to the Secretary of Defense.  As Supreme Allied Commander, Stavridis led the NATO Alliance in global operations from 2009 until 2013.

Dean of the Fletcher School of Law and Diplomacy

Between 2013-2018, James Stavridis served as the 12th Dean of the Fletcher School of Law and Diplomacy at Tufts University.  During this time he published widely and was a sort after media commentator. The Fletcher School had a remote television studio where NBC frequently interviewed him, CNN, Fox News, and others.

Books James Stavridis has authored include Destroyer Captain: Lessons of a First Command (2007).  Partnership for the Americas: Western Hemisphere Strategy and the US Southern Command (2010).  The Accidental Admiral: A Sailor Takes Command at NATO (2014). The Leader’s Bookshelf (2017) and Sea Power: The History and Geopolitics of the World’s Oceans. He lectures widely and appears regularly on public forums.

James Stavridis is highly decorated and has won numerous awards, honours, and medals.

He also has been awarded the Naval Order of the United States's Distinguished Sea Service Award (2015) and the Intrepid Sea, Air & Space Museum's Intrepid Freedom Award (2015). In 2016, the Washington Institute presented him with the 2016 Scholar-Statesman Award, and in 2017, the American Veterans Center awarded him the Andrew Goodpaster Prize.

James Stavridis is married to Laura Hall, the author of Navy Spouse's Guide.