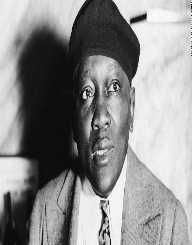 American boxer John Arthur “Jack” Johnson was born on March 31, 1878. He was the third of nine children in his family. His parents were former slaves. His mother worked as a dishwasher, but his father was a janitor.

Johnson grew up in Galveston, Texas and attended school for five years. He was a talkative and bright kid. He helped his father at his janitor job and also worked for the local milkman, taking care of his horses. In his hometown, segregation was not an issue, since almost everyone there was poor. He had a group of friends, which also included white boys.

As a child, Jack Johnson was always protected by his two older sisters, until he was twelve and got into a fight with another boy. The boy hit him in the jaw, and Johnson fought back, winning the battle. After this, he developed a new mentality and toughness. After five years of school, Johnson quit working at the local docs. He hated the job and took several more jobs.

He made his way to Dallas and found work on a race track, exercising horses. He also found an apprenticeship as a carriage painter for Walter Lewis who was a boxing enthusiast. With Lewis, Johnson began to learn some boxing moves.

When he was 16 years old, Johnson moved to Manhattan and worked at several jobs. He eventually earned enough to buy a pair of boxing gloves and started to develop his unique style. Upon returning home, Johnson tested his fighting skills in a quarrel with a local man Davie Pearson. They were both arrested, but after their release, Johnson and Pearson set out to fight, with an extensive crowd watching. He won the fight, and it led him to compete in summer league. His first win earned Johnson $ 1.5, but not long after he stuck out for four rounds with professional boxer Bob Thompson and won $25.

In 1899, Jack Johnson again left his home to become a professional boxer. In the early 1900’s he had already made a name for himself - the Galveston Giant. Johnson was famous in the black boxing circuit and was aiming to get the world heavyweight title. At the time, it was held by Jim Jeffries, but he, amongst many other boxers, refused to fight Johnson.

Johnson’s talent was finally put in action in 1908 when the champion Tommy Burns agreed to fight him. Burns agreed with the promoters if they guaranteed him $30 000. The fight lasted for 14 rounds until the police had to intervene. Johnson was named the winner, and the match was written about in newspapers in New York.

Fight Of The Century

After his big break, Jack Johnson continued to call Jeffries to fight him in a ring. Jeffries finally agreed in 1910. The contest was held in Reno, Nevada with around 22,000 fans watching. After 15 rounds, Johnson won the fight setting himself as the champion of the sport. For the contest, Johnson earned $117,000.

His victory angered a lot of white boxing fans, who hated seeing a black man dominate the sport. The fight caused race riots across the country. In several cases, black citizens were attacked as revenge. Around 20 people across the country were killed, and hundreds were injured during these riots.

Jack Johnson held the world heavyweight champion title for five years. In 1915, he lost the title to Jess Willard in a 26 round match in Havana, Cuba. After this, he continued to fight for 12 more years and retired at 50 years of age.

Johnson was a celebrity and appeared in radio shows, as well as several motion pictures. He also earned a lot by endorsing various products. Johnson liked automobile racing, and he owned several cars. Johnson broke many taboos in the society of his time. He dated white women and was arrogant and taunting against other men.

Johnson was married three times, and all of his wives were white women. In 1911, he married Etta Terry Duryea, a socialite from Brooklyn. She suffered from depression and the following year committed suicide. Just three months after his first wife died, Johnson married Lucille Cameron. After this marriage, ministers in the south recommended lynching of Johnson. Cameron divorced Johnson in 1924, because of infidelity. The following year he married Irene Pineau.

Jack Johnson died on June 10, 1946, when he crashed his car on the U.S. Highway 1. He went to a diner in a small town, but they refused to serve him. He was taken to the Saint Agnes Hospital in Raleigh but later died, at the age of 68. He was buried at the Graceland Cemetery in Chicago, next to Etta Duryea. Irene Pineau was then buried next to him.