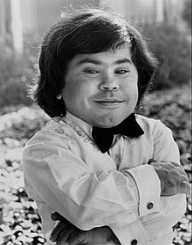 Herve Jean-Pierre Villechaize was born 23rd April 1943 to Andre and Evelyn Villechaize. He was born in Paris, France, and he was one of four children.

Villechaize's father was a surgeon. When his son was born with dwarfism, he looked for a cure for the condition. Despite trying various facilities, he was unsuccessful in helping his son.

He turned to paint as a student to forget the bullying that he had to endure. Villechaize enrolled at the Ecole des Beaux-Arts to study art in 1959. Two years later, the Museum of Paris displayed his work. Villechaize became the youngest artist to accomplish such a feat.

In 1964, he moved to the United States. Villechaize settled in New York City and began to teach himself English.

Villechaize began his artistic career in America as an artist, photographer, and painter. He then moved into acting productions. From acting in stage productions, Villechaize started winning movie roles. His debut role was in Chappaqua in 1966. He followed this with a role in Item 72-D in 1969.

Villechaize got his major break in 1974. He was cast in the James Bond movie, The Man with the Golden Gun. Before winning the role, Villechaize was broke and living out of his car.

As well as acting through the 1970s and 1980s, Villechaize was also an activist against child abuse. This included attending crime scenes and confronting the abusers, despite his small stature.

In 1977, Villechaize won the role of Tattoo on the television program called Fantasy Island. He was with the show until 1983, appearing in 132 episodes. He caused problems on the set by continually harassing the women. Villechaize also argued with the producers. The producers fired him from the show when he demanded a pay the same as his co-star.

His last appearance on television was a cameo role on The Ben Stiller Show. Villechaize was in 15 movies during his career. These included Seizure (1974) and Airplane II: The Sequel (1982).

Villechaize died on 4th September 1993. He shot himself after firing a warning shot to wake his girlfriend. His suicide note said he was depressed due to his long-term health problems.