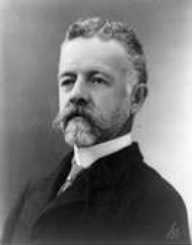 Henry Cabot Lodge was an American historian and Republican politician.

Henry Cabot Lodge was born in the city of Beverly, Massachusetts, on May 12, 1850. His father was John Ellerton Lodge, and his mother was Anna Cabot. Both of them belonged to prominent political families. He spent his childhood in the neighborhood of Beacon Hill in Boston, as well as in the town of Nahant in Massachusetts.

He got his undergraduate degree from Harvard College in 1972. Two years later, he graduated from Harvard Law School. He passed the bar exam, and he started working in a law firm in Boston. In 1976, he got a Ph. D. in history.

After receiving his doctorate, Henry Cabot Lodge spent the next three years teaching American history at Harvard. He wrote and edited different papers regarding important historical events and people.

He soon became a member of the American Antiquarian Society and the American Academy of Arts and Sciences. He also served on the Board of the Smithsonian Institute.

Lodge was a huge patriot. He supported any decision that could increase the power of the United States, regardless of the consequences it would have on other countries. He backed the intervention in Cuba, and he called for the annexation of the Phillippines.

Henry Cabot Lodge was a member of the Republican Party. His views on most social and political problems were very conservative. He was one of the most vocal supporters of the Immigration Restriction League. He believed that immigrants from Southern and Eastern Europe were inferior to those from the Western and Northern parts.

He considered them to be less intelligent and more prone to crime. He thought they would damage the economy by lowering the wages and by bringing poor skills to the production process.

Overall, he considered them a threat to the American ideal and quality of life. He proposed literacy tests for future immigrants. He also recommended that the United States completely stop accepting immigrants for a while, at least until the old ones were fully assimilated.

Henry Cabot Lodge advocated for the United States to enter World War I on the side of the Allied Powers. He thought Germany should be punished and destroyed economically. At that time, he was the leader of the Senate Foreign Relations Committee and the Senate Republican Conference.

Because of this, many dubbed him the de facto Senate Majority Leader. This gave him the power to deal with the Treaty of Versailles. He wanted the U. S. to join the newly formed League of Nations but under certain conditions.

Henry Cabot Lodge wanted the country to be given special privileges over others, and he also wanted for every military decision to be approved by Congress first. His conditions were ultimately fulfilled. They became known as the Lodge Reservations. This was the most significant success of his career.

In 1871, Henry Cabot Lodge married Anna Mills Davis, the daughter of Admiral Charles Henry Davis. Their children and grandchildren also married into respectable families and achieved success in politics and the arts themselves.

Henry Cabot Lodge passed away on November 9, 1924. He suffered a stroke while he was in the hospital recovering from gallbladder surgery. He was buried in the Mount Auburn Cemetery in Cambridge, Massachusetts.