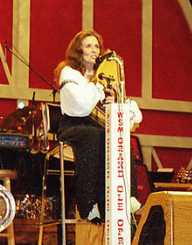 Helen Carter was a country singer/songwriter of the mid-twentieth century. Her talents reached beyond her time in The Carter Family Band.

Helen Carter was born on September 29, 1927, in Poor Valley, Virginia. Her father was Ezra Carter, and her mother was Maybelle Addington Carter, a country musician in her own right. Helen Carter was the eldest of three girls; her younger sisters were Anita and June. Maybelle traveled with The Carter Family Band along with Helen's aunt and uncle. With her mother gone, Helen was responsible for taking care of the family at home.

Helen Carter taught herself how to play musical instruments so that one day she could join the family band. Namely, she played guitar and accordion. However, she also played autoharp, piano, and mandolin.

Helen Carter had her first recorded public appearance with The Carter Family Band in 1938 at the age of ten. That performance on XERA in Texas became a regular gig two times a week. She and her sisters earned $15 a week over the course of four years. Carter sang backup harmony for the radio show.

The band dynamic changed in 1943 when her aunt and uncle left the group. Their contract with the radio station WBT-AM ended, and they moved in their directions. Maybelle changed the band to Mother Maybelle and the Carter Sisters.

Helen Carter continued playing and singing backup while her sister Anita sang lead vocals. As a new group, they continued playing their hit songs for radio programs and shows in Richmond, Virginia and the surrounding area. In 1948 they were performing with top singers of the era like Chet Atkins.

In the 1950s, they were performing with Atkins on the most popular country radio show in the nation, The Grand Ole Opry. Carter and her sisters became some of the youngest inductees into the Grand Ole Opry as their ages ranged from 17 to 22. They were also touring as the opening act for Elvis Presley. The 1960s was also a time for collaboration with Johnny Cash. It was also a time for Carter to branch out into new groups. She recorded songs with Dolores Dinning in 1960 under the name the Blondettes.

As part of the family band, she recorded albums with them as well. Such titles included Sunny Side, Travelin' Minstrel Band, and Three Generations. Throughout the length of her career, Carter and her family collaborated or sang duets with many of the stars of country music. As an individual, Helen Carter was successful in all of her family bands. At the same time, she had more commercial success in the songs that she wrote or co-wrote. From “The Kneeling Drunkard's Plea to “Loving You was Worth this Broken Heart,” more than sixty of Carter's songs were recorded. Some of the music acts included Johnny Cash, Ann-Margret, Mark Dinning, Willie Nelson, and Waylon Jennings, to name a few.

Helen Carter married Glenn Jones in 1950. The couple had four children. Their son Kenneth proved to be a talented musician and songwriter at an early age. Kenneth died in a car accident when he was 16 years old.

Helen Carter died on June 2, 1998, in Nashville, Tennessee at the age of 70. The cause of death was heart disease.