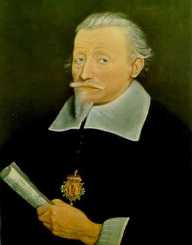 Heinrich Schutz was born on October 18, 1585. He was a German composer and organist. He composed and published volumes of his collections of sacred music.

Heinrich Schutz was born on October 18, 1585, in Saxony. He was born to Christoph Schutz who was an innkeeper and Euphrosyne Bieger. In 1590, his family moved to Weibenfels. In 1599, his talent in music was discovered by Moritz von Hessen Kassel. He became a choirboy and studied music with court Kapellmeister, Georg Otto. In 1608, he joined the University of Marburg where he studied law. The following year he moved to Venice where he studied music under Giovanni Gabrieli.

In 1613, Heinrich Schutz moved back to Moritz’s court at Kassel. In 1614, he became a composer at the electoral court in Dresden. In 1615, he was appointed by Elector Johann Georg I as a composer for another two years. He provided music for court ceremonies and also looked after the musical education of the choirboys. His pupils included pupils such as Theile and Weckmann among others. In 1619, he published his first collection of sacred music known as the Psalmen Davids which was dedicated to the elector.

In 1627, the opera ‘Schutz Dafne’ that Heinrich Schutz composed was performed on the wedding of the elector’s daughter. The same year also saw him visit Gera and Muhlhausen. In 1628, he visited Venice where he studied developments in dramatic music under Monteverdi. The following year he went back to Dresden. He later was invited to compose songs to be used for the wedding festivities of Crown Prince Christian of Denmark. In 1633, he was being paid as the Kapellmeister by King Christian IV. In 1635, he returned to Dresden. In 1639, he left Dresden to serve Georg of Calenberg.

In 1642, Heinrich Schutz got employed at the Danish Court. He retired later on after spending time in Brunswick. In 1650, he published the musical collection ‘Symphoniarum Sacrarum tertia pars.’ In 1651, he asked to be released from his duties and for him to be granted a pension, but the same was not granted. His requests were accepted after the death of the elector in 1656. He composed songs even after his retirement for several occasions in Dresden. He also worked on his works ‘The Three Passions’, ‘The Settings of Psalms cxix and c’ and ‘The Christmas History.’

In 1619, Heinrich Schutz married Magdalena Wildeck with whom he had two daughters, Anna and Euphrosyne. In 1625, his wife died. He never married again, and his children were taken care of by his maternal grandmother. He died on November 6, 1672, of a stroke. He died at the age of eighty seven.