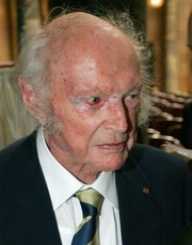 Heinrich Harrer is an Austrian-born novelist. He has known for his adventures around the world as well as his nonfiction works including Seven Years in Tibet.

Heinrich Harrer was born on July 6, 1912, in Hüttenberg, Austria. He always had an adventurous streak with love for skiing and mountain climbing.

Heinrich Harrer attended Karl-Franzens University in Graz, Austria. He studied sports and geography from 1933 to 1938.

While studying at the university, Heinrich Harrer competed in the skiing event. He was supposed to attend the 1936 Winter Olympics in Garmisch-Partenkirchen in southern Germany, but the Austrian Alpine skiing team boycotted the event. One of Harrer's first major feats as a young adventurer was scaling the vertical wall of Eiger, located in the Bernese Alps of Switzerland. The north face of Eiger is known as The White Spider. Many people died making that climb, but his team of four were able to accomplish it. Heinrich Harrer wrote about his experience in his 1959 book The White Spider.

Heinrich Harrer's next expedition was the Diamir Face of the Nanga Parbat. He and his team were captured near Karachi by British soldiers days before World War II was declared. Harrer and his companions were made prisoners of war at a detention camp near Bombay, India. They attempted to escape from their captors multiple times but were successful in April 1944. Heinrich Harrer and Peter Aufschnaiter traveled to Tibet where they found work. Harrer became a photographer to the Court and translated foreign news. During his years in Tibet, he was the tutor to the 14th Dalai Lama.

The Dalai Lama was 14 years old at the time and eager to learn everything that Harrer could teach him. The two became lifelong friends. Heinrich Harrer left Tibet before the Chinese army invasion in 1950. Upon Harrer's return to Austrian in 1952, he wrote about his experiences and published them. Seven Years in Tibet was released in 1952 and quickly became a bestseller. Lost Lhasa was published in 1953.

Heinrich Harrer led many more mountaineering adventures after that. He climbed in multiple countries and became one of the first to climb many peaks such as Mount Deborah and Mount Hunter, both in Alaska. Heinrich Harrer also climbed the highest peak in Oceania, the Carstensz Pyramid in 1954. He also traveled through the Amazon region, the Himalayas, and the Mountains of the Moon in central Africa.

Heinrich Harrer married Charlotte Wegener in 1938. The couple had one son but divorced in 1943. He later married Margarethe Truxa in 1953. However, their marriage ended in 1958. His third marriage was to Katharina Haarhaus. They were married until his death on January 7, 2006, in Friesach, Austria. Heinrich Harrer was 93 years old.

Even though he was a mountaineer and adventurer, Harrer has a legacy for sharing the history and culture of Tibet with the rest of the world. His book Seven Years in Tibet has been published in 53 languages, sold over 4 million copies, and became a box-office success.

Heinrich Harrer is recognized for bringing the struggles in Tibet into the international light. He founded the Heinrich Harrer Museum in his birthplace of Hüttenberg, which he dedicated to Tibet.

• Member of the 1935 Austrian Olympic ski team, but did not participate due to the nation's boycott
• Won downhill skiing even at the World Student Championships, 1937
• One of the first in a climbing team to scale Eiger peak of the Bernese Alps in Switzerland, 1938
• Won Austrian national championships in golf in 1958 and 1970
• Honorary Gold Medal of Vienna, 1978
• Gold Medal of Graz, 1980
• Austrian Cross of Honor for Science and Art, 1st class, 1982
• Grand Merit Cross of the Order of Merit of the Federal Republic of Germany, 1982
• Golden Humboldt Medal, 1985
• The book Seven Years in Tibet is made into a film starring Brad Pitt
• International Campaign for Tibet's Light of Truth Award, 2002

Heinrich Harrer admits that he was a member of the Nazi Party and a Sergeant in the SS regiment. He joined after Austria was annexed by Germany in 1938.

However, Harrer was cleared of any war crimes. He did meet Nazi leader Adolf Hitler, but after his team ascended Eiger peak.