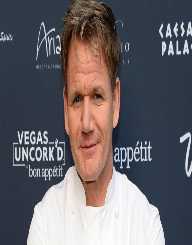 Gordon Hames Ramsay was born on November 8, 1966, in Scotland. He was raised in Stratford-upon-Avon. His father held several different jobs, including swimming pool manager, welder, and shopkeeper. His mother was a nurse. Ramsay has an older sister, as well as younger brother and sister. His father was constantly changing jobs. Therefore the family often had to move. His father was also an alcoholic and at times was very aggressive and violent. When Ramsey was 16 years old, he moved out of the family house and began living in Banbury.

As a child, Ramsey was interested in playing football. He began to play at age 12 in an under-14 football team. He tried out for the football team Rangers in 1984 and was signed to the club when he was 15. Several injuries marked his football career. Ramsey had injured his knee, crushing the cartilage and ripping the cruciate ligament. He trained with the team and played in 2 games, but his injuries were too severe for a professional career.

Ramsey already had developed an interest in cooking and decided to leave football to pursue a career as a chef. At the age of 19, Ramsey enrolled at North Oxfordshire Technical College to study hotel management. In the 1980s he began working as the commis chef at the Wroxton House Hotel. He was in a sexual relationship with the hotel owner’s wife and had to leave his job. Ramsey moved to London and worked in several restaurants, before landing with Marco Pierre White at Harveys.

Ramsey worked at Harveys for nearly three years but grew tired of his bosses raging character and constant violence. He decided to study French cuisine, but White discouraged him from taking the job. He offered him to take a job at Le Gavroche restaurant with Albert Roux. There Ramsey worked for a year, and Roux invited him to work at a ski resort in the French Alps. After this job, Ramsey moved to Paris and worked with Michelin starred chefs Guy Savoy and Joel Robuchon. He worked and studied the cuisine in France for three years, until he could not withhold the physical and mental stress of the kitchens. He then took a year to work as a personal chef on a private yacht.

In 1993, Ramsey returned to London and was offered the position of head chef at the three-Michelin star restaurant La Tante Claire. Just shortly after, White offered Ramsey a head-chef position and 10% share at the Rossmore. Ramsay accepted the job and renamed the restaurant Aubergine. The restaurant earned a Michelin star fourteen months later.

After his first restaurant succeeded, Ramsey expanded his business quickly. He opened the restaurant Petrus, then Amaryllis in Glasgow and later Gordon Ramsay at Claridge’s. Outside of UK, Ramsey first opened his restaurant in Verre, Dubai. In 2005, he opened two restaurants in Tokyo.

All of Ramsey’s business- restaurants, media, and consultancy are held in the Gordon Ramsay Holdings Limited. Ramsey runs the company with his father in law and owns 69% of the stake. In 2006, he opened five new restaurants with the Blackstone Group and also purchased three pubs in London which were converted into gastropubs.

Ramsey first appeared on TV in the television documentary Boiling Point and Beyond Boiling Point. In 2004, British Channel 4 released the TV series Ramsay’s Kitchen Nightmares. In the show, Ramsey troubleshoot failing restaurants over a one week period. Ramsey launched the Hell’s Kitchen- the show saw Ramsay attempt to train British celebrities. In 2005, FOX network began airing the US version of Hell’s Kitchen. The show is currently in its 16th season. In 2010, Ramsey became the producer and judge on MasterChef US. Ramsey has also made several guest appearances with other famous cooks.

Ramsey is widely known for his goal of culinary perfection. He is infamous for his short-temper and use of expletives. However, his bad temper has earned him media appeal. He has also been negative towards vegetarians.

In 1996, Ramsey married schoolteacher Cayetana Elizabeth Hutcheson. The couple has four children, Megan, Matilda and twins Jack and Holy. In 2016, the couple announced that they are expecting their fifth child, but it was later revealed that his wife suffered a miscarriage.

Ramsay has also been involved in several charities. In 2009, he finished his aim of running ten marathons, which he did to raise awareness for Scottish Spina Bifida Association. He is the organization’s honorary patron since 2004. To raise funds and awareness, Ramsay has participated in several of the organization’s events. In 2005, Ramsay and Indian chef Madhur Jaffrey participated in the charity Spice Up Your Life event and raised £100,000 for HIV/AIDS work in India.

During his career, Ramsay has earned a total of 16 Michelin stars. His first solo venture Restaurant Gordon Ramsay earned three stars, making Ramsay the first Scottish chef to achieve that. At the time, his restaurant was only one of four restaurants in London to hold three stars. In 2006, Ramsay was awarded Officer of the Order of the British Empire by Queen Elizabeth II.