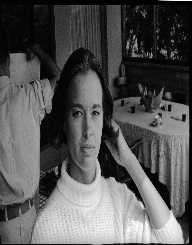 Gloria Vanderbilt was born on February 20, 1924, in New York City, New York, USA. Her parents were Gloria and Reginald Vanderbilt. Sadly, her father died when she was just a toddler. After his death, she was raised by her mother, maternal grandmother, and a nanny. However, after an explosive custody battle, in which her paternal aunt, Gertrude Vanderbilt, won custody of Gloria, who then only lived with her mother in the summers.

Sometime around the late 1940’s, Gloria Vanderbilt developed an interest in art and acting. She took art lessons at the Art Students League of New York. Around the same time, she also took acting lessons from Sanford Meisner.

Gloria Vanderbilt’s first acting role was in an episode of the show Producers Showcase in 1954.

She returned to the screen in 1957, when she appeared in two episodes of the show Studio One in Hollywood as the character Elizabeth Alexander. Throughout the rest of the 1950’s, she appeared on three other television shows: Kraft Theatre, Playhouse 90, and The United States Steel Hour.

In the 1960’s, Gloria Vanderbilt continued to act exclusively in television, working on three shows: Adventures in Paradise, Shirley Temple’s Storybook, and The Dick Powell Theatre.

After appearing on The Dick Powell Theatre show in 1963, she didn’t return to acting again until 1981. In this year, she had a small role in the show The Love Boat. On this show, she played herself. This is the most recent acting role she has as of 2018. It is unlikely that she will act in anything else.

Gloria Vanderbilt began working as a model when she was a teenager. She continued in this line of business for several years before becoming a fashion designer in the 1970’s. She began working with various fashion companies, one of the first being Glentex. She designed fashion scarves with his company. Later on, in the 1970’s, she began working with the Murjani Corporation, where she designed fashionable and tight jeans. She later sold the right to the jean design to this company. This jean design was later purchased by the Jones Apparel Group in 2002.

In the late 1970’s, Gloria Vanderbilt made her own fashion company called GV Ltd. This company is no longer in business. The current GV Ltd. is a technology-based company.

Over the course of her lifetime, Gloria Vanderbilt has written several books. Most of her books are either memoirs or romance novels. Some of her most famous books are listed below.

It Seemed Important at the Time: A Romance Memoir

Once Upon a Time

Gloria Vanderbilt has been married four times. She married first to Pat DiCicco in 1941. However, Vanderbilt later divorced her husband in 1945 because he was abusive. She married for a second time to Leopold Stokowski. This couple had two children together: Christopher and Stanley. This couple’s marriage later ended in divorce. Her third husband was Sidney Lumet. This couple married in 1956 and divorced less than a decade later. Her most recent husband was Wyatt Emory Cooper, who she married in 1963. Anderson Cooper is the son of this couple. The couple also has another son, Carter.