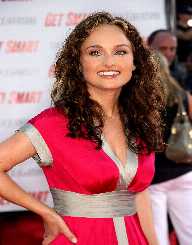 A world-famous celebrity chef, Giada de Laurentiis has enjoyed a highly successful career as the host of Everyday Italian, on the food network and also as an author of culinary books. A 2012 Culinary Hall of Fame inductee, Laurentiis has written two New York Times bestsellers and is the founder of GDL foods.

Giada de Laurentiis was born into a family of actors, producers, and actresses. She was born on August 22, 1970, in Italy, Rome. Her birth name is Giada Pamela de Laurentiis. Her mother, Veronica, is an actress. Her father Alex De Bendetti is also an actor and producer. Her grandfather Dino De Laurentiis is a well-known filmmaker and director.

At the early age of 7, Laurentiis moved to the USA with her family. She had trouble adjusting to the new country as she did not know English. She has three siblings – one sister Eloisa and two brothers, Igor and Dino.

Giada de Laurentiis went to the Marymount High School in Los Angeles.  Then she attended the University of California, Los Angeles. She passed out with a B.A. degree in anthropology.

After completing her graduation, she moved to Paris, France, to learn the culinary arts at the famous Le Corden Bleu.

Giada de Laurentiis graduated in 1996, but despite having a B.A. in anthropology, she chose to follow her heart and learnt the culinary arts at the Le Corden Bleu, Paris. She returned to Los Angeles and worked for the Ritz and later the Spago.

After a while, she started on her own with the now highly favorite GDL Foods.

An article by Giada de Laurentiis was published in the Food & Wine magazine in 2003. This caught the eye of the Food Network, and she was offered to host the Everyday Italian. She gained quite a lot of fame hosting this series.

Her Everyday Pasta series was top-rated in 2007 where she shared delicious pasta recipes. In the same year, she started Giada’s Weekend Getaways, another popular series that continued to run for years.

She then became a regular contributor and co-host of NBC’s Today. In 2010, Laurentiis released a critically acclaimed series Giada at home.

Giada de Laurentiis has written several culinary articles and books. Her recipe books have been very well received. Two of her works Giada at home and Weeknights with Giada reached the #1 spot on the New York Times Best Seller List.

Giada de Laurentiis has enjoyed a highly successful on & off-screen career. She won the Daytime Emmy Award for Outstanding Life Style in the year 2008. She also earned two nominations for the same award in the years 2010 and 2012. In 2012, she became an inductee into the Culinary Hall of Fame.

A stable career woman, Giada de Laurentiis married Todd Thompson in 2003. The couple was blessed with a daughter Jade, on March 29, 2008. This marriage lasted 12 years when the couple separated amicably in 2015.