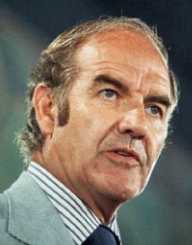 George Stanley McGovern was a former US bomber pilot turned politician. He is also well known for his resounding defeat to Richard Nixon in 1972. He won in only one of the fifty states in the US presidential elections.

In the year 1922, 19th July, George Stanley McGovern was born, in Avon, South Dakota. His paternal grandfather was an Irish immigrant. McGovern was born into an active Christian family of four children.

His father was a reverend minister in a local Methodist Church. His mother was of Irish descent born in Ontario, Canada.

He graduated from Mitchell High school in 1940. McGovern got a scholarship and enrolled at Dakota Wesleyan University in 1941. He volunteered to list in the army the same year. After the war was over, he came back to Dakota University. He eventually graduated with a degree in Arts in June 1946.

George McGovern served in the US military for four years. When he joined the military, he had a civilian pilot license. Due to the shortage of pilot personnel, he was trained as a fighter pilot. McGovern had several missions in Europe during the WW2.

He was discharged from the military in 1945 with the rank of First Lieutenant. McGovern was also decorated with several military honors during his service. These included the Distinguished Flying Cross and the Air Medal.

George McGovern earned his Master and Ph.D. in History from the Northwestern University in Evanston. He lectured at his previous university for some years. He developed an interest in politics while teaching at the Dakota University.

His political activities came to the front in 1948. He campaigned for Progressive Party presidential nominee Henry Wallace. When Wallace dropped out of the race, McGovern decamped to the Democrats. McGovern rose through different ranks of the party. He helped create and stabilize the Democrats in the 1954 elections.

In 1956, he successfully ran for office and defeated the incumbent Harold Lovre. McGovern represented South Dakota District 1 in the US Congress. George McGovern retained the seat in 1958 against Republican Joe Foss.

In 1960, George McGovern ran for Senate and lost. Two years later in 1962, he won the seat to the US Senate in an open race. Though considered an underdog, he went on to defeat the former Governor Joe Bottum.  McGovern represented South Dakota in the Senate for 19 years.

Despite having a military background, McGovern was a strong critic of the Vietnam War. He also fought for the military budget cut. Considered an outsider in the race, McGovern won the Democrat presidential primaries in 1972.

In the national presidential elections, he was routed by the then incumbent Richard Nixon. McGovern’s slogan of America Come Home was his undoing. The American public later changed its view on the war. He won in only one state, Massachusetts. Nixon won with a record that is yet to be broken in the US presidential elections.

In his time as Senator, he was vocal against the injustices done to the underserved in the community. He fought police brutality in Chicago and the civil rights movement crackdowns in Alabama.

George McGovern also managed to see through legislation providing relief and support to the poor. In 1981, he left office after a resounding defeat to Republican James Abdnor. McGovern retired from politics.

He went back to lecturing at the University of New Orleans. In 1984, he again went into the Democratic primaries and lost. Despite losing, McGovern supported the Democratic candidate in the bid. The Republican incumbent Ronald Reagan won with a landslide.

In 1991 during the Gulf War, he turned around and supported President Bush. This surprised both his friends and enemies.

George McGovern was married to Eleanor Stegeberg from 1943 to 2007. The union ended with the death of Eleanor after 64 years of marriage. The couple had five children. Despite not being an alcoholic, McGovern lost two of his children to the vice that destroyed his grandfather.

George Stanley McGovern died on October 21, 2012. His remains were cremated. After a memorial service, they were later buried next to his wife at the Rock Creek Cemetery.

Throughout his public service, he distinguished himself as the advocate for the poor. His relentless efforts were in and out of the Senate. He also served in numerous Congressional committees as chairperson. He was also an author. At his funeral, many eulogized him as the champion of the poor, and peace.