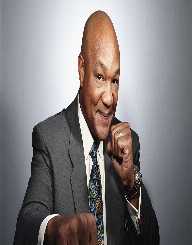 George Foreman was born on January 10, 1948, in Marshall, Texas, USA. His parents are Leroy Moorehead and Nancy Foreman. He also has a brother, Roy Foreman.

George Foreman was only 15 when he dropped out of high school. He was known to fight with strangers, and he even belonged to a gang for some time. His life was anything but stable, but that changed when he became involved with the Job Corps.

The Job Corps provided a helpful connection to Doc Broaddus, who encouraged George to stop fighting on the streets, and to begin fighting in the boxing ring.

By training with Doc Broaddus, George Foreman quickly learned all of the ins and outs of boxing. In 1968, George Foreman won a gold medal for heavyweight boxing in Mexico City. Shortly after this inspiring victory, he decided to become a professional boxer.

George Foreman had his first professional fight in 1969 when he was 21 years old. He worked hard in his career, winning 37 matches, before becoming the heavyweight boxing champion, not once, but twice. However, he didn’t win every game he got into. He also became the heavyweight division world champion in 1973.

In 1974, he was defeated by the famous Muhammad Ali. His loss against Ali was the only time he would lose a fight by knockout in his entire boxing career. In 1977, he lost to Jimmy Young, which derailed his boxing career.

In 1987, ten years after losing to Jimmy Young, George Foreman re-entered the boxing scene. He was now 38 years old and he had gained at least 50 pounds since his last fight. He had to work hard to gain back the strength in his muscles, confidence, and fans that he once had. He worked hard and was allowed to face the heavyweight champion, Evander Holyfield.

George did not win, but fans and critics alike praised him for taking on the much younger challenger. He had another title fight in 1994 when he was 45 with Michael Moorer. He won this fight, becoming the oldest heavyweight champion ever.

In 1997, he lost a fight to Shannon Briggs. This would prove to be his last fight. During his boxing career, he won 76 matches, 68 of them by knocking out his opponent. In his whole career, he only lost five matches.

In 1994, George Foreman became the spokesperson for a grill named after him. With his endorsement, the restaurant sold like crazy and still sells well today. It is estimated that George Foreman has made millions on the grill.

George Foreman also had a clothing line, books, and a reality TV show, which he starred in with his most recent wife and ten of his twelve children.

In 2003, George Foreman was inducted into the International Boxing Hall of Fame.

George Foreman won several awards for Fighter of the Year during his boxing career.