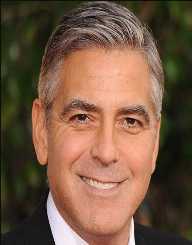 George Timothy Clooney was born on May 6, 1961, in Lexington, Kentucky. His mother was a beauty queen and local city council worker. His father was an anchorman and game show cost. Clooney also has an older sister Adelia.
The family was strict Roman Catholics, although Clooney himself has stated that he does not believe in God. He began his education at the Blessed Sacrament School in Kentucky, and later attended the St. Michael’s School in Columbus, Ohio. From 1968 to 1074 he attended the Western Row Elementary School in Mason, Ohio. While he was in middle school, Clooney developed Bell’s palsy. The condition partially paralyzed his face, but he recovered in one year.

The family moved to Augusta, Kentucky where Clooney attended the Augusta High School. He was an excellent student and sports enthusiast. He even tried to play professional baseball but did not make pass the first round of player cuts. Since professional sports career did not work out, Clooney decided to study journalism. He attended the Northern Kentucky University and majored in broadcast journalism, and then attended the University of Cincinnati. He did not graduate from either of the schools. Clooney was at the time working several different jobs to support himself.

Clooney made his first on-screen appearance in the TV miniseries Centennial in 1978. His first major role was in the 1984 sitcom E/R. Afterward, he played a handyman in The Facts of Life. Clooney’s career started to pick up after he got a part in the famous sitcom Roseanne. His first film appearance was in the 1988 comedy-horror film Return of the Killer Tomatoes. While pursuing several acting jobs, Clooney also was studying at the Beverly Hills Playhouse acting school.

Clooney’s big breakthrough came in 1994, when he was cast for the role of Dr. Doug Ross in the NBC hit medical drama ER. Clooney played the role from 1994 until 1999. For his work, he has received two Primetime Emmy Award nominations and three Golden Globe Award nominations. While working on ER, Clooney also appeared in several films. His film break-through was the crime thriller From Dusk till Dawn. This film was followed by the successful romantic comedy One Fine Day. Clooney also starred as Batman in the 1997 film Batman & Robin. The following year, Clooney starred in the comedy Out of Sight, which marked the first of many future collaborations with director Steven Soderbergh.

After leaving the hit TV show ER, Clooney decided to focus on his film career. In 2000, he starred in the disaster drama The Perfect Storm. The same year he also starred in the Coen brothers adventure comedy O Brother, Where Art Thou? His next project with Soderbergh was the 2001 heist comedy Ocean’s Eleven. The film turned out to be Clooney’s most successful project, earning $450 million worldwide. It was followed by two sequels- Ocean’s Twelve and Oceans Thirteen.

Clooney and Soderbergh co-founded the Section Eight Productions. He made his directorial debut in the 2002 film Confessions of a Dangerous Mind. Clooney’s next successful project was the 2005 film Syriana, which was based on the CIA former agent’s Robert Baer’s memoirs. For the role, Clooney won the Academy Award. Clooney’s next project was the 2006 film noir The Good German.

In 2006, Clooney received the American Cinematheque Award for his contribution in the art of motion pictures. Clooney was also nominated for Academy Award and several other awards for Best Actor in 2007 film Michael Clayton. Clooney has also tried out his talent in voicing, becoming the voice of Mr. Fox in the film Fantastic Mr. Fox.

In 2011 Clooney starred in the drama The Descendants. The role of a husband whose wife is in a coma after an accident earned him a Golden Globe Awards and Broadcast Film Critics Association Award. For the role, he was also nominated for Academy Award and BAFTA Award. For his production of Argo, Clooney won the Golden Globe, BAFTA Award and Academy Award for Best Picture. Other successful projects that Clooney has taken part of since then include Gravity (2013), The Monuments Men (2013), and Tomorrowland (2015).

In 1989, Clooney was married to the actress Talia Balsam. The couple divorced in 1993 and Clooney stated that he is never getting married again. Since then he has dated several celebrities, like Celine Balitran, model Lisa Snowdon, actress Renee Zellweger. However, in 2014, Clooney got engaged to British-Lebanese lawyer Amal Alamuddin. The couple was married the same year at Ca’ Farsetti. It was reported in early 2017 that the couple is expecting twins.
In 2007, Clooney got in an accident while driving with his motorcycle. 12 staff members were suspended without pay, for looking into Clooney’s medical records. Besides his acting career, Clooney has also appeared in commercials for Fiat, Nespresso, and Martini. He has been named on the Time magazine’s 100 Most Influential People in the World 3 times.

Clooney is also a political activist and humanitarian. He supported both of President Obama’s campaigns. In 2016, he endorsed Hillary Clinton for the 2016 election. Clooney also works on the Not On Our Watch Project, which focuses attention to stop and prevent mass atrocities. He has also advocated for the resolution of the Darfur conflict.