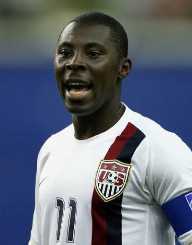 Freddy Adu is a Ghanaian American soccer player who currently plays as an attacking midfielder for Las Vegas Lights FC in the United Soccer League. Born on June 2, 1989, he signed a professional contract at age 14 in 2004, becoming the youngest athlete in the United States to achieve that. This was after D.C. United drafted him on January 16 during the 2004 Major League Soccer (MLS)SuperDraft. He also plays as a winger and forward for his club. On April 3, 2004, he made his Major League Soccer debut as a substitute in a game against the San Jose Earthquakes, making him the youngest player to play in that league.

On April 17, Freddy Adu made another MLS history by becoming the youngest scorer in the MLS after scoring in the 3-2 loss to the MetroStars. As a young chap with much potentials, he was referred to as the “the next Pele” and considered the future of United States Soccer. Despite his enormous talent and accompanying hype, he could not live up to expectations. He has played for about thirteen clubs in eight countries since leaving D.C. United in 2006. He has played in countries like Brazil, Finland, Greece, Monaco, Portugal, Serbia, and Turkey.

Freddy Adu was born on June 2, 1989, in the port city of Ghana where he grew up. His talent and skill in football were discovered at a very age as he played with older peers. His mother, who is also a Ghanaian, won an American Green Card Lottery in 1997 when he was eight years. With this, the family moved to the United States settling in Rockville, Maryland. While there, he received education at the Sequoya Elementary School. During the period, a local coach discovered his footballing talent, and he started featuring in domestic games. After his elementary education, he attended The Heights School, a private school in Potomac, Maryland. Six years in the United States, he was given a U.S. citizenship.

In 2004, at age 14, D.C. United chose Freddy Adu as the one overall pick during the 2004 MLS SuperDraft, making him the youngest American athlete to sign a major league professional contract. He made his MLS debut and first match for D.C. United on April 3, 2004, in a game against San Jose Earthquakes, coming in as a substitute. This made him the youngest player to feature in United States professional sports. His first goal in the MLS was in the 75th minute in a 3-2 loss against the MetroStars on April 17, 2004. This also made him the youngest player to score in MLS history. He ended the season scoring five goals with three assists in 30 games. He was traded to Real Salt Lake on December 11, 2006, in exchange for a major allocation goalkeeper Jay Nolly. He made a debut for the team in a 2-2 draw against FC Dallas on April 7, 2007.

Freddy Adu made an impressive showing playing for the US U-20 team during the 2007 FIFA U-20 World Cup. He caught the eyes of Benfica in the Portuguese league, and after negotiation was transferred for a fee of 2 million on July 30, 2007. He made a debut for Benfica in a UEFA Champions League game against FC Copenhagen as a substitute on August 14, 2007. Benfica sent him on loan to French side AS Monaco in July 2008 for a season. He returned to Benfica in July 2009 but was again sent on loan to the Portuguese side Belenenses for the 2009 – 2010 season.

Freddy Adu has played for several teams in different countries. He played for Greek side Aris from 2010 to 2011 and then to the Turkish second division club Caykur Rizespor from February 2011 to July same year. He returned the US MLS to play for Philadelphia Union from August 2011 to 2013. He has also played for Bahia in Brazil, FKJagodina in Serbia, KuPS in Finland, Tampa Bay Rowdies, and currently playing for Las Vegas Lights FC.

In May 2005, Freddy Adu started dating American singer Jojo but broke up in September 2006. The two are still friends according to Jojo in an interview on American Top 40 with Ryan Seacrest.