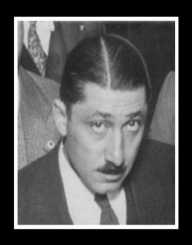 Gangster Frank Nitti was born on the 27 January 1886 in Angri, Italy. His parents were Rosina and Luigi Nitto, and he had three siblings. When Nitti was a small child, his father died and his mother subsequently remarried. His stepfather Francesco Dolendo moved Brooklyn, New York in 1890 and the rest of the family followed him in 1892.

Frank Nitti did not complete his high school education.

Frank Nitti dropped out of school and did various jobs including working in a factory and bowling alley. His relationship with his stepfather failed, and he moved out of the home. Nitti then moved to Chicago and opened a barbershop, At some stage, he started using the barber as a front for stolen goods. Around this time he got to know the boss of the North Side Gang, Dean O’Banion.

Nitti related to Texas where he was involved in the organized crime but had to leave in a hurry after stealing from Galveston criminals. Returning to Chicago, he becomes involved with Al Capone and his gang. Prohibition had become law in 1919, and the group was focused on the illegal liquor trade. Nitti had a network of smugglers who were bringing in Canadian whiskey, and Capone and his gang wanted his contacts and ability. At some stage in early 1920, Nitti became Capone’s bodyguard. It was then that he earned the nickname of The Enforcer.

After warfare between the two Chicago gangs, the North Side Gang and the South Side Outfit, Capone became the boss of the South Side Outfit. Towards the end of the 1920s, the authorities had decided to get rid of Capone and eventually prosecuted him on tax evasion charges. He was sentenced to eleven years in prison. Nitti was also indicted on similar charges and was sent to jail for eighteen months.

When he emerged from prison, Nitti took over as the boss of the South Side Outfit. After prohibition was lifted in 1933, the gang concentrated on prostitution, racketeering and gambling.

In the early 1940s police charged Frank Nitti with various offenses. One charge was his gang’s involvement with interfering with the workforce at large Hollywood movie studios. Rather than face prison a second time, he killed himself on the 19 March 1943.