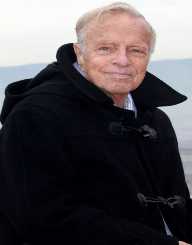 Franco Zeffirelli was born on the 12 February 1923 in Florence, Italy. His birth was the result of an affair between his mother; who was married to a lawyer, and another man. He was six when his mother died.  It was when he turned sixteen that his biological father acknowledged him. Illegitimacy was frowned on in Italy in the early part of the 20th century, and as a boy, this made life difficult for Zeffirelli.

Originally intending to be an architect, Franco Zeffirelli enrolled at the University of Florence to study architecture. While at analyzing, he joined the theatre company. Germany then occupied Italy, and this interrupted his studies. Zeffirelli fought as a partisan during WWII, returning to his studies in art and architecture at the University of Florence when the war ended. He then decided to study theatre and moved to Rome.

In 1946. Franco Zeffirelli started working with Luchino Visconti’s Morelli-Stoppa Company. He worked as both a stage director and an actor. Zeffirelli was interested in stage design, and his first operatic production was Rossini’s L’Italiana in Algeri at La Scala opera house in Milan (1952-1953). Zeffirelli worked with renowned directors such as Vittorio De Sica, Roberto Rossellini, and Luchino Visconti. Then in the 1960s, he started directing his plays in London and New York.

In 1965, Franco Zeffirelli directed Maria Callas in Tosca at Covent Garden, London. Zeffirelli took to film direction, and some of his major works are Shakespearean. The Taming of the Shrew (1967) with Elizabeth Taylor and Richard Burton. Romeo and Juliet (1968) with Olivia Hussey in the role of Juliet and Leonard Whiting as Romeo. This film adaption won Zeffirelli an Oscar nomination for best director. In 1977, he directed a miniseries Jesus of Nazareth, starring Robert Powell. This miniseries is still popular. One of the few failures of his career was Endless Love (1981) starring Brooke Shields; which the critics panned.  Another Shakespearean film was Hamlet (1990) with Australian actor Mel Gibson of Mad Max fame.

Franco Zeffirelli also remade Jane Eyre (1996). Then directed  Tea with Mussolini (1999) and Callas Forever (2002).  The Callas film was a tribute. He once said that he felt Callas, Mother Theresa, and Margaret Thatcher were the three most outstanding women of the 20th century. Throughout his career, Zeffirelli has continued working in film, television, and opera including production of La Boheme in 2008

In 1962 Franco Zeffirelli received a special Tony Award for the set designs and direction of Romeo and Juliet at the Old Vic. In 1963, he was nominated for a Tony Award for Best Scenic Designer, for The Lady of the Camellias. He shared the nomination with Gianni Quaranta. In 1969 Zeffirelli was nominated for a Best Director Oscar for Romeo and Juliet (1968).

Romeo and Juliet was also nominated for a Golden Globe: Best Director in 1969. He was awarded the European David in 1979. In 1983 he was nominated for an Oscar: Best Art Direction-Set Direction for La Traviata (1982). Zeffirelli has won four David di Donatello awards including a Best Director award for Romeo and Juliet. The United Kingdom awarded Zeffirelli with an honorary knighthood (KBE) in 2004.

Franco Zeffirelli will be remembered as one of the great film directors of the 20th century.

Franco Zeffirelli has had some relationships which he documented in his autobiography but has never married. He considers himself a homosexual man, disliking the term gay. There was a newspaper report where Italian researchers identified thirty-five living people who are related to the high Leonardo da Vinci. Using genealogical records, they found that Zeffirelli was one of them.

In 1986 his autobiography was published, entitled merely Zeffirelli.

A conservative, Zeffirelli was elected a Senator in 1994, representing the Forza Italia party. He won re-election in 1996.

Franco Zeffirelli announced in 2007 that he would be leaving his entire life’s work to the city of Florence. Including costumes, set designs, sketches, books, and notes. In time, the city will have a permanent exhibition space in Florence.