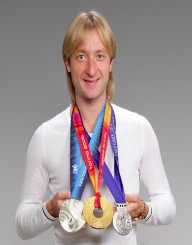 Evgeni Viktorovich Plushenko was born 3rd November 1982, in Solnechny District of Khabarovsk Krai, in Russia. He is one of two children, with an older sister.

Evgeni Plushenko studied at school No. 91 in Petrogradsky District. After graduation, he enrolled at Lesgaft University, and he graduated in 2005. In 2004, he graduated from the Faculty of Tourism and Hospitality at the Saint Petersburg State University of Engineering and Economics.

Evgeni Plushenko learned to skate right through his childhood, from the age of four. When he was 11, in 1994, the Volgograd ice rink closed, and when this happened, he was sent to St. Petersburg to train with a highly sought-after coach, Alexei Mishin. Mishin understood the difficulties that Plushenko was going through at such a young age, and he rented a room in St. Petersburg so that Plushenko’s mother could live nearby to support her son.

Evgeni Plushenko thrived under Mishin, and won the World Junior Champion title at the age of 14, making him the youngest winner in the history of the event. Plushenko’s skill continued to improve and over the 2000-2001 season, he won every event he entered. He also won his first World Championship title.

Between 2006 and 2008, Evgeni Plushenko decided to take a break. As well as surgery for a groin injury in 2005, he had also suffered continual knee problems, so the break was well needed and well deserved.

With Plushenko’s withdrawal from competition, Russia began to lose its dominance in the world figure-skating arena. Unable to sit and watch the decline, Plushenko announced he would return for the 2007-2008 season, but his return never happened.

Plushenko announced he was going to compete in the 2010 Winter Olympics and went back into training with his coach Mishin. He won the 2009 Russian titles, and in the 2010 Olympics won a silver medal.

There was some controversy as Plushenko spoke out against the new rules and judging system. The new rules cost him the gold medal. The ice-skating community was split as to whether his performance was better than that of the gold medallist.

In 2010, Evgeni Plushenko skated in exhibitions, and in June of that year, the International Skating Union (ISU) ruled he was ineligible to skate in the exhibitions because he had not been approved by the Russian Figure Skating Federation. He did not appeal but continued to skate in preparation to compete in the 2014 Winter Olympics.

Plushenko submitted his letter requesting reinstatement in April 2011, and in June the ISU reinstated him.

Evgeni Plushenko had started talking about a back problem, although his coach played it down. Plushenko worked with new choreographers in 2012, but he aggravated his spinal problem and underwent surgery in Munich, Germany. The physicians suggested he refrain from skating for a month, but Plushenko only took one week off before returning.

Although he skated well and won another Russian Championship, he had to withdraw from the 2013 European Championships. In January, he flew to Tel Aviv in Israel to undergo further back surgery.

Plushenko was back on the ice before long and earned himself a place in the 2014 Winter Olympics team for Russia. Russia won the team gold for skating, of which Plushenko played an instrumental role.

He retired from competitive skating in February 2014, and the official announcement was made in March 2017. Shortly after, he had yet more surgery on his back. Evgeni Plushenko moved into a coaching role, and now coaches Adelina Sotnikova the 2014 Olympic champion, Vladimir Samoilov, and SerafimaSakhanovich.