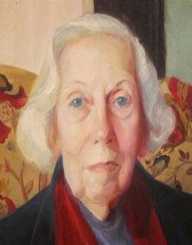 American author and photographer Eudora Welty was born on the 13 April 1909 in Jackson, Mississippi to Mary Chestina and Christian Webb Welty. She had two brothers. Her father was a director of  Lamar Life insurance company, and her mother was a schoolteacher who encouraged her children to read widely. Language and storytelling as well reading from the New Testament formed an essential part of her upbringing.

Eudora Welty attended the Mississippi State College for Women (1925-1927) before transferring to the University of Wisconsin, obtaining a BA in English Literature (1929). She then studied advertising at Columbia University (1930).

Eudora Welty found it challenging to find work in New York during the Depression years and returned to her hometown of Jackson in 1931. Around this time, her father died of leukemia. Initially, she worked on a radio station and for a newspaper, then was employed by the Works Progress Administration as a publicity agent. Part of her job involved taking photographs of life in Mississippi, doing interviews and collecting stories. She also began writing fiction and founded a writing group, the Night-Blooming-Cereus Club. She became a full-time writer in the mid-1930s. In 1936, she held a one-woman photographic exhibition in New York City.

One of Eudora Welty's early short stories was The Death of a Traveling Salesman (1936) which was published in Manuscript, a literary magazine. She went on to have work published in The New Yorker, The Sewanee Reviews and other literary publications.
Her work drew the attention of Diarmuid Russell, a literary agent who took an interest in her literary output. She also met writers such as Katherine Anne Porter and William Faulkner.

When Welty’s first story collection, A Curtain of Green (1941) was published, Porter wrote the introduction. In the mid-1940s, Welby worked as a staff writer on the New York Book Reviews, under the pseudonym Michael Ravenna.

Welty published five novels, three non-fiction books, one children’s book and dozens of short stories. Other works include The Robber Bridegroom (1942), Delta Wedding (1949), The Ponder Heart (1954) and The Golden Apples (1949). Short story collections include The Wide Net and Other Stories (1943),  The Bride of Innisfallen & Other Stores (1955). During the 1970s, she published  Losing Battles (1970) and The Optimist’s Daughter (1972). In 1971 One Time, One Place, a collection of photographs Welby had taken during the years of the Great Depression in Mississippi was published.

A Worn Path (1941) was runner-up for the O.Henry Award in 1941. Eudora Welty won the Pulitzer Prize for Fiction in 1972 for The Optimist’s Daughter. One Writer’s Beginnings (1984) the first book published by Harvard University Press was runner-up for the 1984 National Book Award for Non-Fiction. In 1992, Welty won the Rea Award for the Short Story for her contribution to the American short story. She was presented with the National Institue of Arts and Letters gold medal in 1972.

Eudora Welty never married. She lived at home and nursed her mother who died in 1960.  In her later years, she had arthritis. Eudora Welty died on the 23 July 2001.