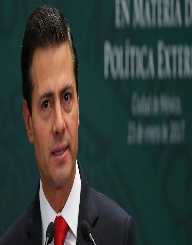 Enrique Peña Nieto was born on July 20th, 1966. He is the 57th president of Mexico. He is also the current president of the nation. His birthplace was in Atracomulco, State of Mexico. Since he was young, Nieto had a strong interest in politics, and by the time he was 39 years, he was elected into office as governor of the state. Years later, he joined the race for the presidency in 2012, and he won the elections becoming the 57th president of Mexico. Unfortunately, his ruling tenure has been marked with controversies involving drug trade and other related scandals. This has led to a drastic decline in his approval ratings from the people that elected him to an office.

Enrique Peña Nieto was born in 1966 on the northwestern side of Mexico. He is the oldest son of Gilberto Enrique Peña del Mazo and Maria Sanchez. He has other three siblings that follow him in the family. His father worked as an electrical engineer. Maria, on the other hand, was a school teacher.

Pena Nieto attended the Denis Hall School located in the York County, United States. His main intention of enrolling at the school was to ensure that he could learn English. At his young age, he had begun dreaming of taking over as the governor of the state of Mexico. He frequently told his classmates about his dream of one day being the governor.

Pena Nieto went for his law degree at Universidad Panamericana situated in Mexico City and later graduated in 1989. While undertaking his law degree at the institution, he linked himself with the Institutional Revolutionary Party (PRI). This was one of the strongest political parties in Mexico as it had a larger influence on the nation’s politics.

Pena Nieto’s father had close ties with the former governor of the state of Mexico, Jorge Jiménez Cantú. He was a family friend. Alfredo del Mazo González who was his father’s cousin also served some time as the governor of the state. As a result of the strong political influence backing Pena Nieto, he dived into politics in the 1990s. Soon, his profile was highly regarded out there as he attended political appointments which enabled him to cross paths with influential people in the political and business arena.

Prior to running for the governor’s position, Pena Nieto had earned himself political power by winning some important political offices such as the administrative secretary from 2000 to 2002 and later on he went to serve as the congressman from 2002 to 2004. After this, he set his political ambitions higher by running for the governor’s seat. His campaigning style was unique and that it is one of the main reasons why he pulled a large number of voters to elect him. For instance, he had numerous promises that he pledged to fulfill if elected as the governor. Believing in him, Mexicans elected him as the ideal candidate for office in late 2005.

While serving as the governor of Mexico’s state from 2005 to 2011, Pena Nieto’s tenure was indeed successful and that this gave him high regards in the eyes of the public. Soon after, he used his political admiration to win votes as the next president of Mexico. Pena Nieto was among the presidential campaign candidates in 2011-2012. He won the elections and helped in saving the tarnished image of PRI as they were considered by Mexican citizens to be the most corrupt and unjust party. Shortly after he won the elections, rumors were out there claiming that he had bought votes from the people. These were allegations that were raised by his foe Andres Manuel Lopez Obrador.

After taking over the Mexican president in late 2012, Pena Nieto did not waste time in trying to fulfill the promises that landed him in the highest office in the nation. He worked on dealing with the violence-related issues that were as a result of increased crime from drug cartels in Mexico. Aside from this, he went on to deregulate the energy industry.

This was a move that would permit nations abroad to access the nation’s gas and oil reserves. Another crucial change that he brought was to enhance the growth of the automobile industry. He achieved this by making it less difficult for car manufacturers to set up their factories in Mexico.

It is also during his tenure as a president that one of the notorious and famous drug lords, Joaquin "El Chapo" Guzman, was captured in 2014. However, he escaped from prison in 2015. This occurrence raised questions about Pena Nieto’s government and their uneven performances.

Pena Nieto’s married Mónica Pretelini in 1993. The pair had three children before Pretelini passed away in 2007. Three years later, he got married for the second time to Angelica Rivera, an actress.