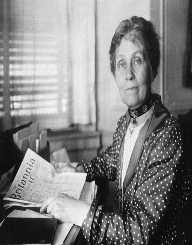 Emmeline Pankhurst was born on July 15, 1858. She was a British political activist. She was also the leader of the British Suffragette Movement. She was born into a family that was obsessed with radical politics. She was the founder of the Women’s Franchise League. She also co-founded the Women’s Social and Political Union. She was arrested a couple of times for her activism, but she did not give up.

Emmeline Pankhurst was born on July 15, 1858, in Manchester in England. She was born to Robert Goulden who was a businessman and Sophia Jane Craine. Her parents were politically active. She was brought up alongside ten siblings. She loved reading from a young age, and so she read ‘The Pilgrim’s Progress,’ ‘The French Revolution: A History,’ ‘Stowe Uncle Tom’s Cabin’ and ‘The Odyssey.’ When she was fifteen, she joined the Ecole Normale de Neuilly in Paris, France. Her parents were not so concerned with her education as they wanted her to marry early.

In 1879, she got married to Richard Pankhurst who was a barrister who supported women’s suffrage, education reform and freedom of speech. They lived in Russell Square where she hosted guests such as Indian Member of Parliament Dadabhai Naorija and Socialist Activists Herbert Burrows and Annie Besant among other prominent names. In 1888, the National Society for Women’s Suffrage split and Emmeline joined the Parliament Street Society. The National Society for Women’s Suffrage advocated for the rights of women to vote. The Parliament Street Society did not, however, support the rights of married women to vote.

In 1889, Emmeline and her husband founded the Women’s Franchise League (WFL) which advocated for both unmarried and married women’s rights to vote. The organization was considered as a radical because it not only supporting women’s voting rights but also equal rights for women in the areas of divorce and inheritance. It also advocated for trade unionism, and it also sought alliances with socialist organizations. She became friends with socialist Keir Hardie who was from Scotland. In 1893, Keir was made a member of parliament, and he assisted in the creation of the Independent Labour Party (ILP). She later left WFL and joined ILP. In 1894, she was elected poor law Guardian in Chorlton-on-Medlock, and she was not impressed with the conditions in the Manchester workhouse.

In 1898, her husband died leaving her with a lot of debts. Emmeline resigned from the Board of Guardians and started working as a paid registrar of Births and Death in Chorlton. In 1900, she became a member of the Manchester School Board. In 1908, as she tried to enter the parliament, she was arrested and imprisoned for six weeks.  She later assisted in the founding of the Women’s Social and Political Union (WSPU) which was all about women being allowed to vote. In 1910, she led a protest with three hundred women. Emmeline was demanding to meet Prime Minister Asquith, but he did not give them audience. The women were treated so badly by the police that the day came to be known as Black Friday. The women did not give up as they went on hunger strikes, committed arsons, conducted protests and they were arrested at the same time.

In 1912, Emmeline was arrested and released most of the time. When World War I began, she stopped the suffrage campaigns. The government also released the suffragists that they were holding. She later founded an adoption home for babies of single mothers in Camden Hill. In 1916, she visited North America, Canada and the United States where she raised money. She also pleaded with the United States’ Government to help Britain. In 1918, the Representation of the People Act came into place allowing women over 30 years to vote. The WSPU later became the Women’s Party. In 1928, she joined the Conservative Party and ran as a candidate for parliament. Her campaign was however affected due to her ill health.

In 1878, she got married to Richard Pankhurst with whom she has five children, Christabel, Francis, Adela, Henry Francis and Estelle. In 1898, her husband died. She died on June 14, 1928, in London. Emmeline died at the age of sixty nine.