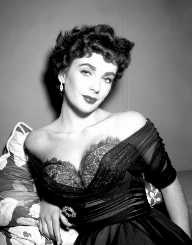 Elizabeth Rosemond Taylor was born on February 27, 1932, in Hampstead Garden Suburb in London. Her father Francis was an art dealer, but her mother Sara Sothern was a retired actress. They both came from the United States. Therefore Taylor had dual citizenship. Her parents moved to London in 1929 and opened an art gallery. She also has an older brother.

At the beginning of her life, Elizabeth Taylor lived a privileged lifestyle; however, the Great Depression severely affected her family’s finances. Taylor was enrolled in Byron House Montessori school in Highgate. In 1939, the family decided to return to the United States, due to the increasingly tense political situation in Europe. The following year, her father opened an art gallery in Los Angeles, and the family settled in Beverly Hills.

Elizabeth Taylor's mother was often told how beautiful her daughter is and that she should audition for films. She was at first reluctant, but during the World War II, film industry began to grow increasingly. Taylor had her first audition in 1941 for Universal Pictures and Metro Goldwyn Mayer. She was offered a contract with both studios, but her mother decided to accept Universal’s offer.

Her first role was There’s One Born Every Minute in 1942. However, not many opportunities followed, since the casting director believed she doesn’t look or act like a child. In late 1942, she starred in MGM film Lassie Come Home. After this, she appeared in English films Jane Eyre and The White Cliffs of Dover.

In 1944, Elizabeth Taylor starred in National Velvet, a project which was looking for a child actress with British accent and skills to ride a horse. She had to wear braces to correct her teeth, and the filming was pushed back for several months until she grew tall. The film was a box office success.

After this film, MGM closed a seven-year deal with Taylor. In 1947, MGM began cultivating a more mature image of her, portraying her as a typical teenager. That year, she starred in the film Cynthia and Life with Father. The following year, she starred in the commercially successful films A Date with Judy and Julia Misbehaves. Her most successful role in adolescence was the film adaption of Little Women in 1949.

Elizabeth Taylor's first role as an adult was the 1950 film Conspirator. The same year, she starred in the comedy The Big Hangover. Her big break as an adult star was the 1951 film A Place in the Sun. The film was a critical and commercial success, grossing $3 million.

In 1952, after her scandalous divorce from her first husband, only nine months after their wedding, Taylor was sent to Britain to star in the historical epic Ivanhoe. The film became MGM’s highest grossing film, earning $11 million. The same year, she signed a seven-year contract with MGM with a weekly salary $4,700. Under the new agreement, her first roles were Rhapsody and Elephant Walk, followed by Beau Brummell and The Last Time I Saw Paris.

Despite her various roles, Elizabeth Taylor had yet to earn a widespread recognition. During the 1950s, the film industry began focusing more on quality, rather than quantity of their films, which benefited Taylor. In 1956, she starred in the epic drama Giant. The film became a box office success, and Taylor received critical acclaim.

Her first significant awards nomination was for the 1957 film Raintree County. Her next project was Cat on a Hot Tin Roof, which Taylor considered being her career high point at that moment. For the role, she was nominated for the Academy Award and BAFTA.

In 1959, Elizabeth Taylor starred in the drama Suddenly, Last Summer, which earned her $500,000, an Academy Award nomination and her first Golden Globe award. The following year, she starred as a high-class prostitute in the movie Butterfield 8, which became a major commercial success.

After her contract with MGM was finished, Elizabeth Taylor was cast in the 20th Century Fox 1963 film Cleopatra. The role made her world famous, and Taylor became the first actress to earn $1 million for a role. Although the film earned more than $15 million in box office revenues, it nearly bankrupted Fox due to the extended filming time and expensive set. The film was received with mixed reviews, and Taylor was said to be overweight, and her voice was too thin.

Her next project was the 1963 film The V.I.P.s, after which she took a two-year hiatus.

In 1966, Elizabeth Taylor received critical acclaim for her role in Who’s Afraid of Virginia Wolf? For the role, she won Academy Award and BAFTA. The same year she also starred in Doctor Faustus in Oxford, which was later produced into a film. In 1967, Taylor was cast in Reflections in a Golden Eye.

In the 1960s, Elizabeth Taylor's career was in decline. She starred in several roles, which were neither commercial nor box-office success. In 1972, she acted in three films, which were most successful. Her best-known performance from the year was Zee and Co. in 1974, her only movie was The Driver’s Seat, which was a failure. During the mid-1970s, Taylor focused more on her marriage rather than on film.

In 1980, Taylor starred in The Mirror Crack’d and on the Broadway production The Little Foxes. The play was successful, and Taylor decided to create the Elizabeth Taylor Repertory Company. The company’s first and only production was Private Lives, opening in 1983. Although it was a commercial success, the play mostly received negative reviews.

From the mid-1980s, Elizabeth Taylor mostly began starring in television productions and focused on her HIV/AIDS activism. Her last film was The Flinstones in 1994. She starred in several TV projects, but in 2001 announced her retirement.

Elizabeth Taylor's own life drew a lot of attention during the years. MGM organized her first dates in 1948, and the following year, she was engaged to William Pawley Jr. Her first marriage was to the heir of Hilton Hotels, Conrad Hilton, Jr. in 1950. However, the couple broke up after just nine months of being married.

Her second husband was British actor Michael Wilding, with whom she married in 1952. They had two sons together. At the time, Taylor’s career began to grow, and she became more confident, which led to the couple growing apart. She and Wilding divorced in 1957.

Her third husband was film producer Mike Todd, with whom he had one daughter. Unfortunately, he died in 1958, just one year after their wedding in a tragic plane crash. Devastated by her loss, Taylor began seeing Eddie Fisher, who was at the time married to actress Debbie Reynolds. The affair was a major scandal, but the couple married in 1959.

While filming Cleopatra, Elizabeth Taylor began an affair with her co-star Richard Burton. The two later broke off their marriages and married to each other in 1964. The two starred in 11 films together. Taylor and Burton divorced in 1974 but remarried in 1975. Their second marriage lasted only for a year. Taylor’s 6th husband was Republican politician John Warner. In 1988, she married a construction worker Larry Forensky but divorced him in 1996.