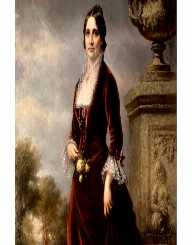 Elizabeth Monroe was born on the 30 June 1768 to Capt. Lawrence Kortright and his wife Hannan Aspinwall in New York. Monroe has four siblings: Hester Gouverneur, Mary Knox, John Kortright and Sarah Kortright. Her mother was of Belgian Dutch ancestry and related to the Roosevelts. Her father was a wealthy merchant who helped found the New York Chamber of Commerce. Lawrence Kortright had served as a privateer during the French and Indian War. When Monroe was nine years old, her mother died, and her wealthy, well-connected grandmother helped raise the family. A year after Elizabeth Monroe’s mother died, the family home was engulfed by fire.

For almost twenty years, Monroe accompanied her husband on various postings.  Monroe also served as the governor’s wife (1799-1803).  The couple were sent to Europe between 1803-1807 where they lived in both Paris and London. Monroe and James Monroe were both invited guests at the coronation of Napoleon in 1804. In 1811 James Monroe was appointed Secretary of State and in 1817, Monroe was elected the 5th President of the United States of America. Monroe served as First Lady for two terms (1817-1825).

Elizabeth Monroe’s health had been delicate for a number of years and the couple retired to the estate in Loudoun County, Virginia where she withdrew from public life. She died at Oak Hill Estate, Loudoun County on the 23 September 1830 at age 62. Her husband died ten months later.