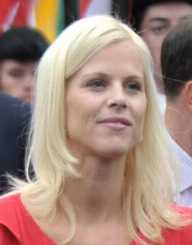 Elin Marie Pernillo Nordegren was born on January 1, 1980, in Stockholm, Sweden. Her parents were influential in Sweden. Her mother was a politician and her father, a radio journalist. Elin had a twin sister, Josefin and a brother Axel. The family grew up in Waxholm.

Both Elin Nordegren and her sister Josefin were working in a store until Elin landed a modeling job in 2000. After the modeling job ended, she and her sister once again started working in another store. This time in a clothing store. Through this job, she met her friends Mia and Jesper Parnevik. She discovered they needed a nanny for their children. Thus, the twins were hired to be nannies, and they moved to the United States.

That association helped introduce her to many people. One of those introductions occurred in 2001 during the Open Championship: her meeting with her future ex-husband, Tiger Woods. She initially was not interested in Tiger Woods. But after that first meeting, the two started dating. Tiger and Elin were seen at events together, and in November 2003 after he played the President Cup tournament in South Africa, the two became officially engaged to be married.

A little over a year later, in October 2004, at Sandy Lake Resort in Barbados, the two were joined in holy matrimony. Three years the couple welcomed their daughter Sam Alexis Wood, in 2007. Two years following that, a son Charlie Axel was born in 2009. A year after that, on August 23, 2010, the two were officially divorced.


The End of the Marriage

There was much speculation about the split. Particularly in the year 2004. Rumors spread of his infidelity, particularly after his motor vehicle accident. While she doesn’t appear to have publicized her hurt, she did disappear from the public view. Only the occasional glimpse happened following that accident. When she is in view, her wedding rings are not seen on her finger. The statement was obvious to the public eye. Trouble in paradise.

Even Tiger himself asked for privacy for him to save his marriage. This happened in a television conference following the accident where he answered the rumors being spread about that car accident. Was he drunk? Did he have another woman in the car? Was she the one he was having an affair with? Did he feel sorry for what he put his then-wife - Elin Nordegren through? What about their children? Would this affect his career? There were rumors again publicized that Tiger had a sex addiction and couldn’t help himself. He was not seen for three months in the public if not for his golf career. He was in rehabilitation for sex addicts and possible alcohol addiction.

Despite the divorce, the two remain friends and raise their two children together. Elin believes he is doing better and so is their relationship.

What Is She Doing Now?

Before she married Tiger, Elin Nordegren had wanted to go to college and obtain a degree in psychology. She had started college towards that end in Berlin Germany. While married to Tiger, she had the desire to go, and so she started class part-time. And in 2014, with a 3.69 GPA, Elin Woods graduated with Honors from Rollins College in Winter Park, Florida. Not only did she obtain a degree, but she started dating.

Elin Nordegren has been seen with a few men since her divorce from Tiger Woods. In 2011 she was dating Jamie Dingman. Then she dated a coal magnate, Chris Cline since 2012. The two have been seen together, although not as much as of late. There were again rumors in 2014 that the two had split. Nothing has been said recently about whom she is dating.

Following the divorce, Elin Nordegren purchased a home for her and the children to live inside because she was selling the old house. It was not far from Tiger Woods house. This was specified in the divorce agreement that she lives close to her ex-husband so that the children would have them both as they grew up.

During her relationship with Woods, Elin Nordegren became the subject of tabloid exploitation. A few nude pictures were published in which a magazine claimed that it was Elin Nordegren Woods. Both she and Woods were not happy and vehemently denied those pictures.

As a result of the publicity, she filed a libel lawsuit and won. The magazine printed an apology and a retraction. As with most celebrities or analogous celebrities, a well-placed trial will go a long way.

You may read more about Elin Nordegren then see her now particularly if she continues to move in the same circles she is now but mostly for philanthropic events or due to her ex-husband Tiger Woods. You will also see pictures of her and her children if they are out with Tiger Woods who is still in the public eye. But you won’t read about her due to any social media accounts that she has opened up. As far as the eye can see is only seen in old newspaper articles, pictures and websites opened up by fans. One such account is called Elin Nordegren Rocks and is a Facebook account. It is dedicated to women who won’t take anything from the men who abuse them.