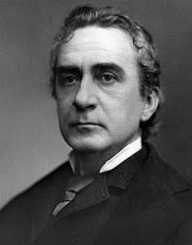 Actor Edwin Booth was born Edwin Thomas Booth on the 13 November 1833 in Bel Air, Maryland, United States. His father, Junius Brutus Booth (1796-1852, was a Shakespearean actor and his mother was Mary Ann Holmes.

Both parents were born in the UK and fled to the United States, Booth Sr. leaving his wife and two-year-old son in the UK. After divorcing his first wife, Booth, Sr.married Holmes in 1851. Three of Booth’s siblings died in a cholera outbreak in 1833 before he was born.

Edwin Booth made his stage debut as Tressel in Richard III on the 10 September 1949, alongside his who took the title role. He made his New York debut was in 1850, when he appeared at the National Theatre in a production of The Iron Chest. Later in 1852, Booth, his father and brother Junius Jr. went to California where they appeared in productions in San Francisco and Sacramento.

They made very little money, and Booth Sr. left his sons in San Francisco, later dying on a steamboat travelling from New Orleans to Cincinnati on the  30 November 1852.

Edwin Booth continued in California, appearing in various venues around San Francisco before leaving for a tour of Australia and Hawaii (1854-1855). Touring with D.C. Anderson and Laura Keene, he appeared in productions in Sydney and Melbourne.

Edwin Booth managed the Winter Garden Theatre in New York City (1862-1867), and he also owned the Walnut in Philadelphia. 1864, he was in a production of Julius Caesar with his brothers John Wilkes and Junius Brutus Booth Jr. Funds from the production went towards a statue of William Shakespeare in Central Park.

He appeared in 100 consecutive performances of Hamlet (November 1964-March 1865) at the Winter Garden Theatre in New York City. After his brother John Wilkes assassinated President Abraham Lincoln in 1865, Booth, a Unionist, was distraught and withdrew from the stage for almost twelve months. In January 1866, he began acting again in Hamlet at the Winter Garden Theatre.

After the Winter Garden Theatre was destroyed by fire in 1867, Edwin Booth built Booth’s Theatre (1869-1874). During the financial crash of 1873, Booth was declared bankrupt and returned to touring, re-establishing himself financially.

Edwin Booth established The Players in 1888, a private artistic community which he ran from his home. He last appearance was playing Hamlet (1891) at the Brooklyn Academy of Music.

Edwin Booth is recognised as one of the most famous Shakespearean actors of his day. He toured widely including the US, Europe, Australia, and Hawaii. He was known for his portrayal of Shakespeare’s Hamlet and played the role more often than any other actor.

The Players in Gramercy Park is still in existence in Manhattan, and there is a statue of Booth as Hamlet in the grounds. The Booth family home, Tudor Hall, in Bel Air, Maryland is a museum. Booth was inducted into the American Theater Hall of Fame.

The Assassination of President Abraham Lincoln

Edwin Booth was a supporter of President Lincoln, but his brother John Wilke was an extreme secessionist. The brothers were estranged at the time that John Wilkes Booth assassinated the president on the 14 April 1865. Booth was distraught and did not act for a year.

In a letter he wrote to the manager of the Boston Theater, Booth claimed that the 15 April 1865 was the most distressing day of his life. In 1864, Edwin Booth saved a man from either injury or death at a train station in New Jersey only to discover later that the person was Robert Lincoln, the son of President Lincoln.

At the time he had no idea who the man he had saved was. Robert Lincoln recognised the actor and thanked at the time, later mentioning the incident in correspondence with various people.

Edwin Booth was widowed a second time in 1881. Edwin Booth died on the 7 June 1893 at The Players in New York City.