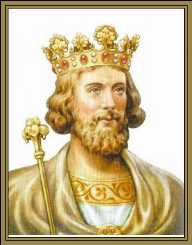 Edward I Of England

Edward, I Of England was born on 17th June 1239, to the House of Plantagenet. His father was King Henry III of England, his mother, Eleanor of Provence. As the first-born son, he was heir to the throne.

One of his childhood friends was Henry of Almain. Henry was Edward I Of England’s cousin, the son Richard of Cornwall, brother of the King. The relationship is notable, as Henry would remain loyal to Edward in future years, through the civil war and during Edward’s crusade.


Ascension To The Throne And Reign As King

Edward I Of England ascended the throne in 1272. As a young man, he had fought with his father in the Second Barons’ War. He was caught and held hostage for a period but managed to escape. Once the war was finished, and England at peace, Edward I Of England joined the Ninth Crusade to the Holy Land. As he was returning in 1272, he was notified of his father’s death. He landed back in England in 1274 and was officially crowned King on 19th August.

Conflict in Europe during the 1280s saw Edward I Of England step in as a diplomat to broker a deal between the warring parties, which he did. In 1291 though, the last Christian stronghold in the Holy Land, Acres, was captured. This was a huge blow to Edward I Of England’s plans.

War was declared in 1276 between England and Wales, but England soon won. Yet another war ensued between the two countries in 1282, but once again, England was victorious. After several battles, in 1282, Wales became part of England. English law was introduced, and Edward I Of England created new towns and filled them with English immigrants. To the north, England’s relationship with Scotland had been a lot more harmonious. In the three year period from 1281 to 1284, though, King Alexander III had three of his children die in a short space of time, followed by King Alexander himself dying.

Scotland’s heir to the thrown was his three-year-old daughter, Margaret. It was agreed that Margaret would marry Edward I Of England's six-year-old son, Edward of Carnarvon, although Scotland would remain independent of English rule. Margaret, who was seven, sailed from Norway to Scotland but died along the way. This meant there was no heir-apparent for Scotland. Two front-runners emerged, John Balliol, and Robert de Brus. Edward, I Of England was named as caretaker ruler until the new heir was decided on. Balliol eventually won, although Edward still tried to exert his authority over Scotland. In the end, Edward invaded and won, but his victory would be short-lived.

When Edward I Of England took over the throne from his father, his major priority was to re-establish authority after the reign of his father. He replaced many local officials so that complaints could be heard in a non-biased manner, and he could also find out at the same time, what land the crown had lost. He restored legislation and had the laws ratified. He also held parliament on a regular basis. Edward I Of England faced resistance from his clergy and nobles due to the high taxes he imposed to fund his military, but that soon paled as Scotland once again came to the fore under the leadership of William Wallace.

When he returned from Flanders in 1298, Edward I Of England headed to Scotland and defeated the Scots. Scotland asked the Pope to be their ruler, but this was not to be. Edward, I Of England reached a truce with France in 1303, which in turn, ended the French alliance with Scotland. Scotland was defeated, Wallace was publicly executed, and England took over the rule of Scotland. In 1306, Robert the Bruce crowned himself King of Scotland and set about gaining independence once again for Scotland. Edward I Of England had atrocities committed Bruce’s family again, but it just made the Scots more determined.

Edward, I Of England was thought to have been a pivotal King in the history of England, establishing both parliamentary and constitutional government.

Edward, I Of England was married twice. His first wife was Eleanor of Castile, with whom he had at least 14 children. Of these, five of the girls lived to adulthood, and one of the sons, Edward II. He married Eleanor in 1254, and she died in 1290. Edward I Of England was deeply distressed by her death.

Edward, I Of England second marriage was to Margaret of France, in 1299. He had two sons and a daughter with Margaret.

Modern historians can’t agree about Edward I Of England’s reign. Some believe he made great contributions to the law and administration of England. Others believe he dealt with his nobility very harshly.

It is agreed, though, that Edward I Of England was a very creditable King. He restored royal authority, which had diminished significantly under his father’s rule. He also established a parliament.

Some of his more unfortunate legacy was the harsh manner in which he dealt with the Scots, and also the Edict of Expulsion in 1290 which meant all Jews had to leave England – that is, if they weren’t killed first.

The Edict of Expulsion wasn’t overturned until 1656 – over 350 years later.