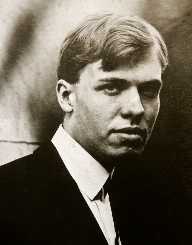 Edward Hopper was born on July 22, 1882, in Upper Nyack, New York. He was the second child of his parents Elizabeth Griffiths Smith and Garret Henry Hopper. His father was a dry goods merchant. His business was not very successful, but together with his wife’s inheritance, the family maintained a good living. Hopper attended public and also private schools.

Hopper did well in school and began to show his talent for drawing at a young age. His father was very intellectual, and Hopper began to be interested in French and Russian culture. His parents supported his artistic abilities and provided him materials and instruction books. Hopper created his first oil painting Rowboat in Rocky Cove in 1895. While in high school, Hopper wanted to become a naval architect, but after graduation decided to pursue a career in art. His parents insisted for him to study commercial art and he enrolled at the New York School of Art and Design.

During his six years of school, Edward Hopper painted several nudes, landscapes, portraits, including self-portraits. His best-known painting from this time is the Solitary Figure in a Theater.

In 1905, Edward Hopper began working part-time in an advertising agency. There he was a creator of cover designs for trade magazines. He continued to create illustrations until the mid-1920s, due to his financial necessities, but he hated the job. He made several trips to Europe, mostly Paris, to escape his frustration with the work. During this time he began painting urban and architectural scenes but was shifted to the lighter palette of Impressionists.

Hopper lived in a studio in New York City and struggled to define his style. He continued to work as a freelance illustrator, but felt very depressed. In 1912, Hopper traveled to Gloucester, Massachusetts where he created his first outdoor painting in America, Squam Light. The following year, he sold his painting Sailing, earning $250. Despite his talent, Hopper’s career as a painter did not catch on for several more years. He participated in several group exhibitions.

In 1914, Edward Hopper was commissioned to handle publicity and create movie posters for a movie company. Despite his intense dislike of illustration work, Hopper loved the cinema and theatre scenery, which became subjects for his paintings. Hopper was mostly creating oil paintings, but he also extensively used etching technique. In this technique, he produced more than 70 works by 1923. The method began to be recognized during the 1920s. Hopper’s best-known works from this time were El Train, New York Restaurant, and Girl at Sewing Machine.

Edward Hopper's first recognition came in 1918 when he was awarded the U.S. Shipping Board Prize for his Smash the Hun poster. In 1923, he received the Logan Prize and W.A. Bryan Prize for his etchings. The same year, he met the artist Josephine Nivison, who he married later that year.

Josephine was a complete opposite of Hopper, being very sociable and outspoken. She managed his career for the rest of their lives together.
Josephine managed to admit six of Hopper’s watercolors to an exhibit at the Brooklyn Museum. His painting The Mansard Roof was purchased by the museum for $100 for the museum’s permanent collection.

Hopper’s work began to be recognized and praised. His paintings represented his attraction to both Parisian and American urban and rural architecture. About the time when Hopper was 41, he had gained financial stability. He rarely appeared publicly and turned down several awards. In 1927, Hopper sold his Two on the Aisle for $1500, which allowed him to purchase a car. In 1930, he painted his last self-portrait.

During the Great Depression, Edward Hopper did better than many other artists. The Whitney Museum of American Art and the Metropolitan Museum of Art paid several thousand dollars for his works. In 1931, Hopper sold 30 paintings. He and his wife often spent time in their cottage in South Truro, Massachusetts. From there they traveled to many areas to find fresh material to paint. His best-known landscape from Vermont is the 1938 painting First Branch of the White River.

Edward Hopper died on May 15, 1967. His wife died ten months later. The collection of more than three thousand of his works was given to the Whitney Museum of American Art.