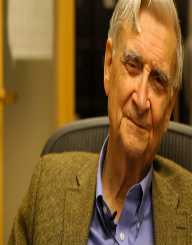 Edward Osborne Wilson was born on June 10, 1929, in Birmingham, Alabama, USA. His parents were Inez and Edward Wilson. Sadly, Wilson’s parents got divorced when he was young. He then lived with his father and stepmother.

As a boy, E. O. Wilson loved nature, plants, animals, and especially bugs. His love of living things would inspire him to pursue an education following the study of biology.

E. O. Wilson first attended the University of Alabama for his post-secondary studies. He later graduated from this school with a bachelor's degree in biology in 1949. E. O. Wilson continued his education at the same school to pursue a master’s degree in the same subject. He earned this degree in 1950.

E. O. Wilson later went away from the University of Alabama and into Harvard University. Here, he pursued a Ph.D. in biology. He earned his degree in 1955.

After graduating from Harvard in 1955, E. O. Wilson almost immediately began working at the same college. Much of his time at the college as an employee, rather than a student, was spent researching with other scientists, W.L. Brown. Wilson’s love of creepy crawly bugs had survived his childhood and made its way into his career. Ants were one of the main things he was studying at Harvard.

Along with Brown, E. O. Wilson worked on a project dealing with the taxonomy (a type of scientific classification system) of certain ants. One type of ant they studied was the Lasius ant. He continued to study ants throughout the 1950’s. He was the one who discovered that ants communicate through pheromones. He also discovered that different ants preferred different habitats, and built their homes differently.

E. O. Wilson continued to study ants into the 1960’s and 1970’s. In 1971, Wilson coined the term “sociobiology.” This term is used to describe the study of biological aspects of the way that humans, animals, and insects act (i.e., their general behavior related to their biology). Also in the 1970’s, Wilson focused on writing. In this decade he published several scientific books.

During the 1980’s, E. O. Wilson focused primarily on his teaching job at Harvard. He continued to teach here professionally until he retired in 1996. However, he is currently still considered to be a Professor Emeritus, which means that he is considered to be an accomplished professor, even though he is retired.

Most all of Wilson’s books were about ants or the biology of other living creatures. Some of his most famous books and the year the book was released are listed below.

All of Wilson’s awards are due to either his general scientific discoveries or his writings about his discoveries. Some of his most prestigious awards are listed below.

E. O. Wilson is considered to be the world’s leading expert on ants.

E. O. Wilson is married to Irene Wilson. The couple married in 1955. They have one daughter together: Catherine. The couple is still married (as of 2017).