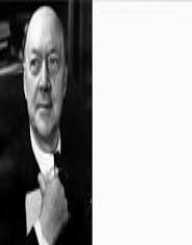 Edwin John Dove Pratt published his works as E.J. Pratt. He was born on February 4th, in 1882. During his golden years, he was famous for his poetic expertise, particularly in Canada. Due to his prowess, he was bestowed with the Governor General's Award.

Edwin John Dove Pratt alias E.J. Pratt was born on February 4th, in 1882. His birthplace was in Western Bay, Newfoundland. His father worked as a Methodist minister.

E.J. Pratt went to Newfoundland's Methodist College where he graduated in 1901. Just like his father, he took a particular interest in the Methodist ministry. Later, he joined Victoria College where he pursued theology and psychology. He earned his BA in 1911. Two years later, he graduated with a Bachelor of Divinity. After continuing with his classes, he received his Ph.D. in 1917.

In 1913, E.J. Pratt was ordained and became a minister since then. Around this period, he took up the role of an assistant minister in Ontario. He served in this post until 1920.

E.J. Pratt tied the knot with Viola Whitney. She was also a student at Victoria College. The two exchanged their vows in 1918. Together, the couple was blessed with one daughter called Claire Pratt.