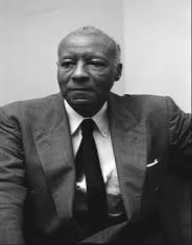 Edgar Daniel Nixon was born on July 12, 1899. He was an African America Civil Rights Leader. He was also a union organizer in Alabama in the United States of America. In 1955, he organized the Montgomery Bus Boycott which allowed African Americas to boycott using buses due to racial segregation. In 1956, the case of Browder Versus Gayle ended bus segregation. He died on February 25, 1987, at the age of eighty seven.

Edgar Daniel Nixon was born on July 12, 1899, in Lowndes County in Alabama, United States of America. He was born to Sue Ann Chappell Nixon and Wesley M. Nixon. When he was young, he only received formal education for sixteen months since blacks were segregated hence they did not receive the best education. He was brought up alongside seven siblings. He and his siblings were raised by their extended family in Montgomery after the death of his mother.

He later worked in a baggage room at a train station. He later became a Pullman car porter hence receiving good pay. In 1928, he joined the trade union, Brotherhood of Sleeping Car Porters. He assisted in forming a branch for the union in Montgomery. He later became the President of the union for many years. In 1934, he married Alease and together they had a son, E. D. Nixon Junior who later became an actor. He later in his life married Arlette Nixon.

Before the Montgomery Bus Boycott, E. D. Nixon worked for voting and civil rights for African Americans who resided in Montgomery. He also became an unelected advocate for the black community. He assisted people in negotiating with white police officers, civil servants, and office holders. Nixon later joined the National Association for the Advancement of Coloured People (NAACP) and became the President of the Montgomery Chapter.

After two years of him joining the association, he was made President. In 1940, he marched with seven hundred and fifty blacks to the Montgomery County courthouse and attempted to register as voters, but they were unsuccessful since white Democrats excluded them by the use of subjective rules. In 1954, he ran for a seat on the County Democratic Executive Committee.

E. D. Nixon organized the Montgomery Bus Boycott since blacks were being segregated in the buses. The front seats in buses were preserved for whites while the back seats were reserved for blacks. The middle seats were available for blacks, but if the bus was full and a white person was standing, then a black was obligated to give up the seat to the white person making this law unacceptable, racial and unfair.

In 1955, E. D. Nixon together with Martin Luther King Junior and other African Americans organized a successful boycott. Later of they formed the Montgomery Improvement Association where Luther became President. The association was meant to get rid of white supremacy in Montgomery. Nixon became the treasurer of the association. The Montgomery Bus Boycott lasted three hundred and eighty one days. The blacks held the boycott even amid threats and political coercion.

They did not use buses at all; some people walked to work while other got rides from the people who had cars. They had to give up some trips in order not to use the buses. Blacks were the major customers of the Montgomery bus service. Hence they lost immense finances during the boycott. As the boycott continued, bombs were reported to have exploded near Martin Luther’s and Nixon’s home. This was viewed as some threat, but these actions did not deter the boycott.

The case of Browder Versus Gayle was instituted in 1956 for the state and city laws to be revised for purposes of getting rid of bus segregation. In the case, it was held that Montgomery’s bus segregation laws were unconstitutional hence violating the fourteenth amendment of the United States Constitution. The Supreme Court upheld the decision of the lower court and refused any appeals from the city and the state as regards the matter.

After the decision of the court, the boycott ended after an order that Montgomery disintegrates buses used for public transport. In 1957, E. D. Nixon resigned from his position as the treasurer of the Montgomery Improvement Association. He, however, continued working for the civil rights of African Americans when it came to housing and education.

In 1983, E. D. Nixon was awarded the Walter White Award from the National Association for the Advancement of Coloured People. In 1986, his house was placed on the Alabama Register of Landmarks and Heritage.