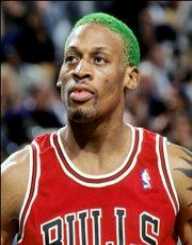 Dennis Keith Rodman is an American basketball player. He was inducted into Naismith Memorial Basketball Hall of Fame. Rodman was also a professional wrestler and actor.

Dennis Keith Rodman was born on May 13, 1961, in Trenton, New Jersey. He was born to the couple Shirley and Philander Rodman, Jr. His father was an Air Force staff who fought in the Vietnam War. His father left the family to move to the Philippines. Rodman has many brothers and sisters.

Rodman was attached to his mother. His sisters Debra and Kim were talented in basketball. They became All-Americans at Louisiana Tech and Stephen F Austin. Debra achieved two national titles with Lady Techsters.

Dennis Rodman attended the South Oak Cliff High School. He joined a gymnasium. Rodman joined as a caretaker at Dallas Fort Worth International Airport. It is during this period Rodman noticed a sudden increase in his height.

He decided to practice basketball again.

Rodman achieved the NAIA All-American and participated in the Portsmouth Invitational Tournament and won the Most Valuable Player distinction.

Detroit Pistons recruited Dennis Rodman in 1986. Pistons moved into 1987 NBA Playoffs. They defeated Washington Bullets and Atlanta Hawks. He had a tiff with Celtics player Dennis Johnson. He successfully enriched his experience. The Pistons entered the 1988 NBA Finals but lost.

During the 1988-89 term, he was an effective defence that he was selected into All-Defensive Team. The Pistons defeated Boston Celtics and Chicago Bulls. Rodman achieved an excellent scoring and provided a formidable defence.

During the 1989-90 term also, Dennis Rodman excelled in his play to get many compliments. During 1990-91 season, he played excellent small forward of Pistons. He thought of committing suicide during 1993 for personal reasons but overcome that attempt. This fact he has confessed in his biography.

In October 1993 he was traded to Antonio Spurs. Here he played power forward. However, after the first play, his behaviour was not normal. He did not play well during the 1994 NBA Playoff. He was suspended for three games because of his tiff with Spurs reception. Subsequently, Rodman suffered an injury in an accident.

The Spurs entered the Western Conference Final, during the 1995 NBA Playoffs.

In the 1995-96 session, Dennis Rodman joined Chicago Bulls. He played and achieved a best at that time. In spite of calf muscle strains, he scored a triple-double against the Philadelphia 76ers in 1996. He was suspended for six plays during a play in 1996 and fined $20000.

Rodman scored well in the 1996 NBA Playoffs against Seattle Supersonics. In the 1996-97 session, though he performed well, he missed the All-Defensive Team call.

In 1997, he was again involved in another accident involving the photographer, Eugene Amos. He had to pay $20000 as compensation to Amos and was suspended for 11 plays without remuneration.

However, Rodman didn’t score well in the 1997 NBA Playoffs. Still, the Bulls reached the 1997 NBA Finals and won.

In 1997-98 session also, Dennis Rodman won his seventh successive rebounding title. The Bulls reached the1998 NBA Finals. The Bills achieved their third title successively, and it was the fifth for Rodman.

He left the Chicago Bulls in 1999 and joined the Los Angeles Lakers. He again left Lakers after playing 23 plays. He again joined Dallas Mavericks but was not interested in the game and did not offer the leadership required of him. He was 38 at this time.

Rodman availed a long vacation post his NBA career and wanted to focus on filming career and wrestling. After the vacation, he played basketball with several teams, but his wish that NBA may invite him was not fulfilled.

Dennis Rodman was inducted into the Naismith Memorial Basketball Hall of Fame.

Dennis Rodman practised wrestling as a hobby earnestly. His premiere was in 1997 at the event Bash at the Beach and in Road Wild as a fraud for Sting and injured Luger to help Hogan to achieve the WCW World Heavyweight Championship. He retired from top-level wrestling in 2000.

Dennis Rodman had his TV show viz., The Rodman World Tour in which he made appearances. He premiered in the film Double Team. The reviews were very critical. He was awarded three Golden Raspberry Awards: Worst New Star, Worst Supporting Actor and Worst Screen Couple. Also, he featured in Simon Sez and Cutaway.

In 2005, he appeared naked for PETA in a flyer “Rather Go Naked Than Wear Fur.”

Dennis Rodman was named the commissioner of the Lingerie Football League in 2005.

He has appeared on many real estate shows. He made tours during these years: visited Vatican City, North Korea, Finland

Dennis Rodman published his autobiography: Bad as I Wanna Be (1996) and I Should be Dead by Now (2005). He has published a few more publications

Dennis Rodman has appeared in Celebrity Apprentice for a charitable cause. He raised $20000 for Make-A-Wish Foundation.

Dennis Rodman dated Madonna. He married Annie Bakes and had a daughter Alexis in 1988. They got separated in early 1990. He again married a model Carmen Electra in 1998 and got separated in 1999. He had a son, Dennis Junior (2000) from Michelle Moyer. The marriage was annulled in 2012.

Rodman was an alcoholic and had stayed in rehabilitation Centre. He was involved in many lawsuits such as misbehaviour, drunken driving, loud parties at home, domestic violence and hit and run accident

Dennis Rodman campaigned for the presidential of Donald Trump. He visited Kim Jong-un. He encouraged Obama to talk to Kim Jong-un.